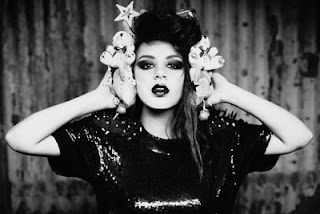 Hyperactive saucy pop starlet in the making Charli XCX first featured on Breaking More Waves way back in November 2009 (here) and since then the wheels of industry have been turning. A few days ago a clip of her future dark-pop single Stay Away cropped up on Soundcloud and her Myspace (listen here) and now she’s formed an unlikely but sexy coupling with Salem who have managed to achieve what to date nobody else has managed to do – to slow down Charli XCX’s vivacious spirit to something that crawls musically in a manner that is bleak, unsettling and brilliantly energumenical.

Following fashion magazine appearances, low key festival slots and now hip druggy remixes it seems that it’s almost time for Charli XCX to be fully revealed to the world. If you haven’t caught her live yet (read our review of her here) you can catch her in the UK at Gold Dust at Hoxton Bar and Kitchen, London on the 20 April and a late night showcase at Coalition in Brighton at the 2011Great Escape.