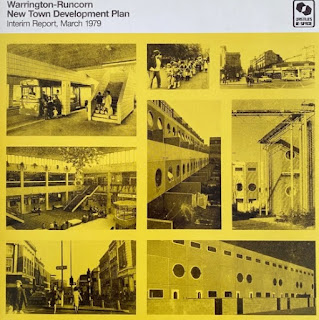 It all starts with a rather upper class accent announcing: “It is an endeavour to provide a balanced town in which the motor car has certain privileges, public transport has certain privileges and people, perhaps most of all, have the privilege of walking about in safety…”. This is the start of Interim Report, March 1979 by Warrington-Runcorn New Town Development Plan - a concept record that has grabbed me on two levels. First the music; sinister but warm sounding retro synth instrumental pieces with a rather melancholy and pulsing cinematic feel. They're like a long-lost cousin of Jean Michel Jarre or for a more modern reference, the soundtrack to Stranger Things. The second is because of my profession; design, architecture and construction is what I do and it helps pay for my music obsession. But that deep interest in buildings and place helps make this seem even more of a special record for me.

The cover of Interim Report, March 1979 reveals that the music contained within was commissioned as the soundtrack to a short film Gateway to the North, Gateway to the Future. The film publicised the work of the Warrington-Runcorn Development Committee in providing a thriving cultural life for the residents of the new estates of Warrington and Runcorn. It claims that excerpts were shown later that year on BBC’s Nationwide. Combined with the ‘Ex Libris Warrington Public Library’ stamp and the retro looking pictures of brutalist town centre landscapes it’s easy to believe the authenticity of this concept.

The reality is that this is all just the simply the brilliant imagination of one Gordon Chapman Fox who has created this impressive homage to these failed architectural and town planning orchestrations. The dream may have been an optimistic one; towns that were safe, clean and futuristic, but the reality was the opposite - grey, dispiriting and falling to pieces. Chapman Fox’s music undoubtedly provides the perfect soundtrack to this basic notion – even if the concept of the film and committee are fake.

Normally on Breaking More Waves I feature new artists who have just a handful of songs out, perhaps leading up to a debut EP. Warrington-Runcorn New Town Development Plan is different. This album, released a few months ago, is already on its way to becoming something of an underground electronic cult-classic. It sold out first time round and is now being repressed on splatter vinyl with a further 600 copies available. But that’s just the start. In September Chapman Fox will release his second long-player under this moniker; People & Industry soundtracks the economic boom in industry in the Lancashire area in the late seventies. I’ve already seen record shops reporting that they are nearly out of their allocation, so as it’s not available on Spotify / Apple (just Bandcamp) you’ll need to get in quick if you want a copy. 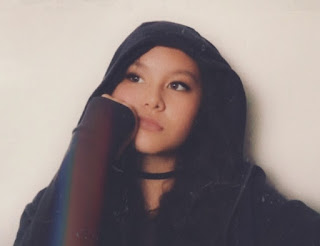 If you take a look at the cover art for the debut single Cool Kid by newcomer Cathy Jain (a simple line drawing of someone crouched on a skateboard) you may well come to the conclusion that she is the latest lo-fi indie darling, producing scrappy bedroom jams for the approval of the vintage clothing wearing, knit beanie wearing hipster crowd. Yet you’d be very wrong. Yes, of course, like most other artists she’s been making music in her bedroom the last year or so, but the production quality of Cool Kid is a long way from being full of imperfections and noise.

Instead Cool Kid has a warm languid feeling to it – think Maisie Peters jamming in the sun with Easy Life. Dealing with the concepts of authenticity and trust Cool Kid finds Cathy examining how some people can change the way they behave and their attitudes in order to make relationships work: “Lying while I’m lying next to you,” she sings after narrating the a scene where someone pretends to love a song that they don’t really like in order to find favour with someone. Is this fake or is it just someone naturally evolving and adjusting? Are we all truly authentic or just products of the environment and people around us? These are the questions that Cathy gets you thinking about in the space of her chilled easy on the ear four- minute modern pop song.

It's fine start (or that is to say new start as Cathy has released some songs in the past but you'll have to dig for them as they have largely been deleted) from this UK based 17-year old who was born in Salford but was brought up in China and Australia before returning to the UK 4 years ago. If you’re going to Latitude festival in less than two weeks you can catch Cathy on the BBC Introducing Stage there.

Posted by Breaking More Waves Blog at 16:15 No comments: