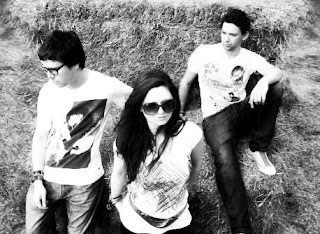 When does a new band stop being a new band? We ask the question because we feature Substatic under the title New Waves, yet this pumped-up electro 3-piece have been out there playing shows for just over 3 years and have already released a debut EP called Days Go On last summer. So whilst they’re hardly new – having supported the likes of Fenech-Soler, Handsome Furs, Unicorn Kid, You Love Her Coz She’s Dead and Crystal Fighters – they’re probably not on enough people’s radars to be considered established as yet.

Substatic make pounding full-on electronic dance pop that’s full of hands-in-the air euphoria and fisting-pumping joy. It’s the kind of music that demands to be played loud on sweat drenched dancefloors. We can imagine the likes of master of the weekend Pete Tong approving of them and apparently we’d be spot on, Mr ‘We Continue’ having already championed the bands remixes.

The track we’re featuring is a new demo - Gold -and it’s the best thing they’ve done yet. It bludgeons with enough forceful rave pulse and commanding female vocal to make you lose your sh*t on the dancefloor, the dirty sexy electronica engaging those hips to thrust and those arms to reach to the sky.

The music that Substatic do may not be incredibly original – there was a lot of this stuff blasting out in the clubs and on the radio in the mid 90’s post-madchester era, but in terms of sweeping you off your feet on a Friday or Saturday night and making you feel alive Gold achieves its objectives.

Email ThisBlogThis!Share to TwitterShare to FacebookShare to Pinterest
Labels: Substatic

That rocks like crazy. They blend crazy electronic sounds with great beats and vocals. I was just jamming to this one.