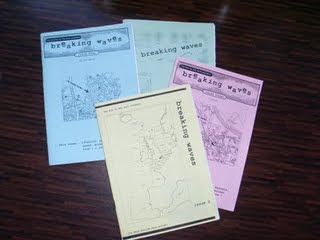 Eleven years ago, in the olden days, I published my first fanzine. It was called Breaking Waves and I published it under the name ‘The Boy On The Boat’. The name was partially true as I lived on a house boat, although technically I was about ten years too old to be considered a boy. Depending on how you define boy of course. The fanzine was about my passion for music. It was produced with virtually no thought and in a rush of speed that was immense fun. Several more copies of this tome of wisdom and comedy followed. Two editions even sold out and made me enough profit to buy half a postage stamp. So overjoyed was I with this good fortune, that I created two children of my own, spent many hours obtaining numerous academic and professional qualifications, moved to the south coast and worked hard at building my career.

In this time my passion for music never took a back seat, but writing about it did. When the time allowed for writing again the fanzine was an obsolete dinosaur. The internet had revolutionised our world. Now it was easy for anyone to write, and thousands did. My first attempt at writing about music was on a blog on the social network site known as Myspace.

This is my second attempt.

It’s just like the first internet version really, with a few lessons learnt.

I'll be writing about the music I love and something about festivals too. Let's see how it goes. Ready ?
Posted by Breaking More Waves Blog at 21:02 4 comments: