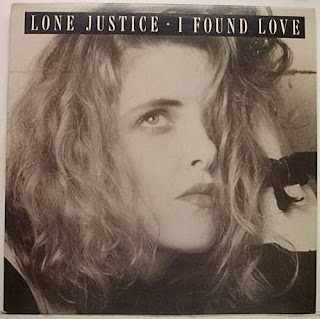 Do you remember Maria McKee? She was the girl with the rasping Tammy Wynette gone rockabilly voice who had a solo number 1 with a tune from some god awful Tom Cruise movie . But Maria’s musical path had started much earlier than that as the lead singer of the band Lone Justice.

I first came across Lone Justice at (still) the best concert I have ever been to in my life: U2 at Wembley Stadium in 1987. But more of U2 another day.

Lone Justice was the first support band. I remember them walking onstage and thinking “Uh-oh.” A bunch of bad-shaggy-hair muso types from the States who looked lost in the huge football stadium. Then something changed.

A simple drumbeat announced the arrival of their lead singer. Looking about half the age of the rest of the band Maria McKee ricocheted on as if she owned the place, bounding round the stage with a defiant punkish energy and attractive confidence. Then she opened her mouth. A bawling bourbon soaked country voice belted out across the stadium and a chord had been struck with me. She sung the crap out of every song she performed. I’d never particularly liked country music before, but this was different. It was raw, it was edgy, it was lift up my petticoats and see what’s underneath sexy and I was hooked.

Lone Justice was never a huge commercial success. When they split Maria went solo and had that number 1 before retreating into relative obscurity recording a number of non-commercial albums including Life Is Sweet a record of tortured crashing guitars and screwed up lyrics to match. It sold very badly and led to the parting of ways with her record label, yet it remains one of my favourite albums of the 90’s. Sometimes art and commerce just don’t mix. I’m not the only one who loved the album either. Someone has written a blog solely dedicated to the record, with posts on every song (here).

But in terms of the music that made me my most heightened memory of Lone Justice and Maria McKee was the song they started their set with at Wembley. Cue drums.

Email ThisBlogThis!Share to TwitterShare to FacebookShare to Pinterest
Labels: Lone Justice, Music That Made Me

I saw Maria play at the Irish Centre, Leeds in about 91/92, she seemed to be suffering terrible stage fright that night - there was no explanation and no internet to find out what had happened - anyway it was a sad sight to see a beautiful and talented musician, mess up so badly. I did see some memorable gigs at the Irish Centre - BAD (twice), The Waterboys and Mary Margaret O'Hara.

Cheers DJ Slippers. I only saw Maria solo once and that was in London around the Life Is Sweet tour and that was a fairly intense show to say the least.

Great point about the internet though - these days you can come home after a gig and find out pretty much the reason for anything that happened due to the world wide web !

Thanks for plugging my blog. It's always nice to know there are other appreciators of Maria out there.

No worries. A pleasure :)