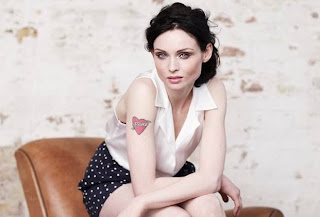 Ask pretty much anyone (except Sophie Ellis-Bextor fans) to name another Sophie Ellis-Bextor song besides Murder On The Dancefloor and they’ll probably struggle, which is a real shame because over the years Sophie has produced some pop classics. Let’s remind ourselves. Take Me Home (A Girl Like Me), a number 2 UK hit single, Get Over You (no.3), Mixed Up World (no.7), Music Gets The Best Of Me (no.14) and of course her track with Spiller – Groovejet (If This Ain’t Love) a bona fide number 1 hit single that stayed in the charts for nearly half a year.

And even before that there was ‘indie Sophie’ with her band Theaudience (the no gap between the two words was important for artily cool points) and songs with titles that have never been repeated since – If You Can’t Do It When You’re Young When Can You Do It ? and A Pessimist Is Never Disappointed.

There was and is a Sophie Ellis-Bextor song for everyone (ok well not hip hop dudes or hairy metal kids perhaps) and now the woman who shimmies like we have seen no other woman shimmy on stage is back, with a reasonably blissful piece of dance pop entitled Starlight, that whilst not being quite on a par with all of the songs just mentioned is still pleasant enough and because it’s Sophie and because Breaking More Waves has a big place in its heart for pop and Sophie, we’re streaming it for your listening pleasure so you can make your own mind up. Irrespective of the (we suspect) lack of chart success and radio play this song will bring Sophie, we’ll love her till the end, because pop music isn’t just about brilliant songs it’s about brilliant people.

The new Sophie Ellis-Bextor album Make A Scene is out on June 6 and finds Sophie working with the likes of The Freemasons, Greg Kurstin, Calvin Harris, Cathy Dennis, Metronomy, Richard X and Armin Van Buuren. That's a date for our diary at least.