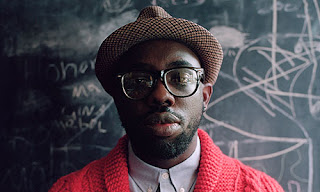 There’s a school of thought that argues that when compared to US rap music, UK rap music just doesn’t work. We’re not sure if this is true. This argument is like comparing a James Cameron film with a Mike Leigh film – they’re both very different and almost beyond comparison. The Cameron film will reach a wider audience and get greater recognition, but for some people the Mike Leigh film will be more engaging than any blockbuster could. It’s really a case of listen with your mind and ears open and see what grabs you.

Something from the UK that has made our ears prick up is Obaro Ejimiwe, better known as Ghostpoet, who now resides in London but was previously from Coventry. His laptop created album Peanut Butter Blues and Melancholy Jam is an addictive late night languid listen and has already picked up praise comparing it with the impact the debut album from The Streets had. Obaro’s slow spliffy sounding raps are about as far away from US stars such as Jay Z and Eminem as imaginable but show that the UK can produce something as important creatively as anything from the US. We’re taking a punt here but it really wouldn’t surprise us if Peanut Butter Blues and Melancholy Jam picked up a nomination for the Mercury Music Prize later this year. There’s also a fair chance it’s going to crop up in our own end of year Top 10.

Next month Ghostpoet will release the second single from the album – Survive It – and it’s likely to gain the album even more attention. It’s a sparse and muffled Walk on the Wild Side flow, finding some optimism despite its downbeat melancholic melody. It taps perfectly into British thinking – stiff upper lip and keep going. “Shrug your shoulders and carry on,” Obaro raps. Exceptional stuff – one of our songs of the year.

Ghostpoet - Survive It
Posted by Breaking More Waves Blog at 00:01

Email ThisBlogThis!Share to TwitterShare to FacebookShare to Pinterest
Labels: Ghostpoet

Personally, i think Brits take U.S. born rhythms and ideas and better them. Ever since the blues, or folk, or rock n' roll.
Ghostpoet is fantastic.

Cheers anon - where are you from ? I often wonder if your perspective on these things depends on your geographic / cultural location.