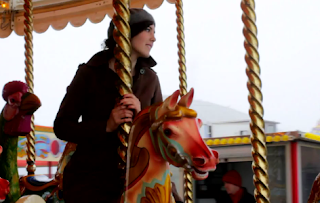 During our recent coverage of the 2011 Glastonbury Emerging Talent Competition we mentioned one particular act that during the live final in Pilton mesmerised us with her hypnotically beautiful folk music. And although we use the term ‘folk’ there are greater depths to what Emily of Emily and the Woods does. There’s a smouldering seductive jazz tinge to some of her songs, a hint of the blues and in her performance there’s a bucket load of confidence mixed up with just a touch of endearing quirkiness. We pretty much fell in love with her music that night, correction, we did fall in love with her music that night, and we promised you that we would be posting on her again at some point.

We’ve been holding back for that moment until today, when Emily’s new video for her song Steal His Heart, the second song on her new EP Eye To Eye is released. Keeping the music very much a family affair the song features Patrick and Benedict Wood (her father and brother) on musical duties together with Ted Dwane (Mumford & Sons) on double bass and drummer Roy Dodds (Fairground Attraction, Eddi Reader). Steal His Heart is more uplifting than some of her sadder acoustic work, an example of which - I Can’t – a song released in memory of her friend who died – also streams below.

The video is a chase between a postman and Emily from London to Brighton beach.

To celebrate the release of the EP on May 4th Emily & The Woods are having a launch party at The North London Tavern, Kilburn High Road, London. If you can make it prepare to feel goosebumps.

I Can't by Emily and The Woods
Posted by Breaking More Waves Blog at 00:01

Email ThisBlogThis!Share to TwitterShare to FacebookShare to Pinterest
Labels: Emily and the Woods