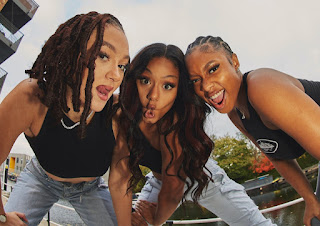 Of course, what is good is entirely subjective, but for those of you who don’t like an occasional dose of commercial mainstream major label pop, stop reading now.

Still with me? Ok good. Today let’s say hi to FLO. Their debut single Cardboard Box is out this week and it’s a big smooth and sassy slice of hooky 90’s referencing R&B pop that’s catchier than Covid. They sound like a modern day equivalent of Destiny’s Child, En Vogue, TLC. Who knew that a song called Cardboard Box, which on the face of it sounds less than inspiring, could tick the good music box.

The cardboard box in question is the box that a cheating boyfriend is going to find his stuff in as FLO announce they’re “changing my number and I’m changing my locks.” How do we know he’s been cheating? “There’s no room for questions, I saw her panties on the bathroom floor,” they open with. Ouch.

FLO consists of Renee, Stella and Jorja and this single is produced by the ever successful MNEK who has worked with the likes of Dua Lipa, Mabel, Anne Marie and Little Mix.

You can hear Cardboard Box below but it's also included on the Breaking More Waves New Music Weekly playlist (here), which is updated each Friday. It’s one hour of my favourite new releases from that week curated to be played in order, like an old fashioned mix tape. It's full of good music. 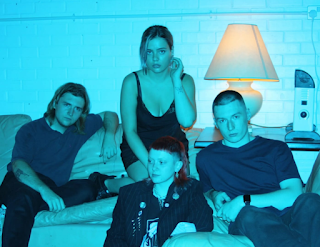 Remember shoegaze? The term might have started as a journalistic insult for the type of band that mixed noise-laden hypnotic guitar sounds with blurry languid vocals all created through a mass of  pedals that led the musicians to stare downwards at their shoes while playing on stage, but it soon became adopted as a defining sub-genre of indie rock championed by some of the floppy fringed groups that came from the late 80’s / early 90’s music scene.

Today’s new band very much fit into that shoegaze genre and whilst their debut EP from 2021 might take the ‘if it ain’t broke don’t fix it’ approach to the original sound, they’ve done a sterling job with it.

Lemondaze has only just surfaced on my radar, thanks to an announcement that they’re playing the 2022 Green Man festival in Wales. However, they formed in 2016 in Cambridge. Initially they were a three-piece but the group has now expanded to four - Isis, Rosie, Jonty and relatively new recruit Finn on drums.

Whilst I don’t normally feature bands under this NEW title that have been in existence for 6 years, Lemondaze only released their first single Neon Ballroom in 2019 and subsequent EP Celestial Bodies (a very shoegazey title if ever there was one) came out in 2021. It only has a few thousand plays on Spotify, and with just five songs out there it doesn’t feel so wrong to be introducing Lemondaze as a new act at this juncture. They’re still fresh and just out of the packet to most people.

The Celestial Bodies EP darkly dazzles and shimmers in all the right places. Opener Twin Paradox is all swirling euphoric guitar assaults and other-worldly vocals. Its psychedelic wall of sound verges on stadium shoegaze (with perhaps just the smallest hint of Sproston Green by The Charlatans buried in there as well) and it sets the band’s stall out perfectly; I can imagine a few guitargasm faces being pulled to this one. Elsewhere Art Form goes off at a more narcotic and hazey pace but builds with immersive textures to create something rather spellbinding. Even better is the track io, which rockets to the stars with added reverb in it's 5 minutes of noisy bliss.

The list of references comes in two parts. First there are the shoegaze originators such as Slowdive, My Bloody Valentine, Chapterhouse and Curve, but there’s also a hint of something a little more modern as well. Members of the band are apparently fans of Wolf Alice and you can tell. Take a listen to a track such as Heavenward to hear the influence. (Sidenote: Theo from the band talked about fans in an article in GQ magazine and mentioned a long-time fan who is now a singer in her own band. Yes, that band is Lemondaze).

From everything I’ve read the Lemondaze live show is even more powerful than the recordings and if that is the case, please can someone in my home city of Portsmouth book them to play please before I have to do it myself. If you like shoegaze (or dream pop as I believe the kids know it these days), you’ll love this lot. 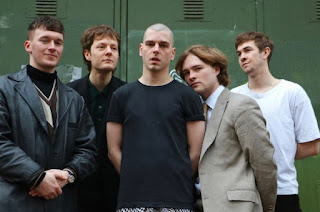 Here’s another slice of new music for you, once again initially served up on the Breaking More Waves New Music Weekly Spotify playlist (which is generally updated for your listening pleasure every Friday and you can follow by clicking here).

This one is a new band called The Queen’s Head. There’s a lot of shouty post-punk bands around at the moment and there’s a growing argument from those of us who believe that to keep music exciting it needs to constantly evolve. The Queen’s Head display that evolution; they are a bit different. Amongst the punk, their debut single contains a big healthy dollop of disco and funk. This isn’t music to mosh to, it’s music to dance to, albeit with a certain snarling swagger. A modern day version of The Clash perhaps?

The band follow in the occasional line of groups who self-title their songs; The Monkees, Icehouse and The Frank & Walters immediately come to mind.

The reason for the title? The band have explained that they wanted to write a theme song for the project: “A band, a fictional pub floating through the cosmos, a musical space where you can explore your desires to dance, have a drink or to cry. After all, where does Britain take its sadness, if not the pub.” It's either that or on social media.

The Queen’s Head are Joel Douglas (Vocals and guitar), Tom Butler (Vocals and bass), Robbie Cottom (Keys), Mike Hendry (Guitar) and George Thompson (Drums). The eagle eyed amongst you may recognise them from the band The Bulletproof Bomb. More material is to follow shortly.