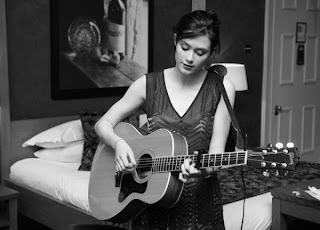 Back in December 2008 when Breaking More Waves named Mumford & Sons as one of our Ones to Watch for 2009 (here) we really had no idea that they would go on to be as phenomenally successful as they have become. This huge success carries with it a number of by-products and one of them is that any other new artist that is associated with the band can prosper from magnified attention.

So it could be for Rachel Sermanni, who has been blessed with the Mumford seal of approval,following jamming with them on a beach in Scotland after meeting them at one of their shows. After this initial meeting Ben Lovett from the group invited Rachel down to London to record some songs with him and she’s subsequently played several Communion gigs – the de rigueur for any aspiring new folkie type who wants to tap in to a younger folk audience easily.

Hailing from the tiny village of Carrbridge in the Highlands of Scotland Sermanni’s songs certainly have a hint of another Mumford associate about them ; namely first album Laura Marling, although Rachel’s voice is of a higher sweeter pitch perhaps more akin to Alessi's Ark or Eva Cassidy. Unlike Marling’s early days however, Sermanni appears to be completely at home performing her songs to an audience, something which she’s recently had opportunity to do both at South by South West and supporting (yes you’ve guessed it) Mumford & Sons as well as Breaking More Waves favourites Stornoway in Scotland.

Listen to her pure vocals and alluringly lovely songs and prepare to be enchanted. The latest new folk princess to queen Marling? She certainly deserves attention for the crown.