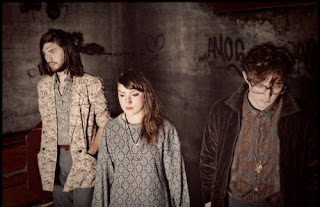 Here’s a new video of Chorea from Brighton’s best gloom ghouls and Breaking More Waves regulars Esben and the Witch. Shot on a cliff in Seaford, Sussex the black and white video features crazy screwed up dancing, backwards waves and the apparent zombie-lemming like procession to suicide as repeated lyrics ring out of watching people “dance themselves to death.” This is not for the faint-hearted. The track is being released on 12” for Record Store Day, together with a remix of Eumenides by Stuart Braithwaite of Mogwai.

For those who are concerned for the safety of the actors in this film - fear not. We have living proof that no humans were harmed during the making of the video as we have spoken to one of the dancers as she worked behind a bar in a gig venue in Brighton just a couple of days ago. We’re sorry if we destroy the theatre of the piece, but she actually seemed like quite a nice normal girl, not some sort of spooky incorporeal being at all. Don’t believe everything you see on the internet.

Email ThisBlogThis!Share to TwitterShare to FacebookShare to Pinterest
Labels: Esben And The Witch

I'm alive and well but clinging to the edge of a cliff was TERRIFYING, and a lot of fun.

Now get back to work serving pints rather than commenting on blogs :)