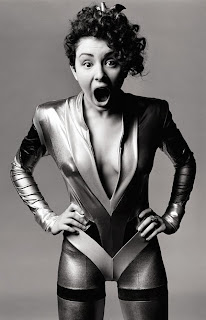 We’ve been trying to avoid Charli XCX . Why? Because up until now we’ve found her blowsy breed of Atari electro rioting just a little bit novelty act and lowest common denominator. She has written a song called Neon Fashion and Glowstix. This says it all really. The mockney rapping on Francheskaar made us shudder at the thought of nineties girl power group Shampoo doing grime whilst watching Skins and pressing the airhorn button last used on the Klaxons Atlantis To Interzone. Plus we’ve never really been sure about a young teenage girl who proclaims “Give me unicorns and fairgrounds and cupcakes and jam and dreams and clouds and curls and bubbles and beats and nights and noise and oceans and disaster...please.” It all just seems a little too over excited, like Charli has spent a night pumping herself full of jelly tots with her friends at a sleepover. Which due to her age she may well have done.
So it comes as a bit of a surprise to find that we really like the new song Do It Well by Charli XCX. Do It Well pops a sedative in the girls mouth and calms things down a little, bringing a Lily Allen LDN styled vocal to the dance floor with softly menacing synth sounds and dark aloof beats. Charli has already been compared with everyone from Lady Ga Ga through to Kate Nash and M.I.A so we’re not talking about anything particularly fresh or imaginative here - if we were going to be insulting then derivative would be the word. However with her flamboyant imagery hitting a variety of tastemakers taste buds and having played a number of well received shows this year including supporting Frankmusik, Charli XCX may well be on to something. We will be interested to see what comes next, although we still find it difficult to see anything particularly long term with her. Early days though, early days.
There’s no video for the song at this moment, and her record company seem to be doing a fairly stern job on ensuring that any unauthorised clips are taken down from the interweb, so instead here’s a video where Charli reveals her love of the Spice Girls and, well, not a lot else really. The song is currently up on her Myspace so go there using the link on her name above for a listen.

Jesus she looks about 14

She's a bit older than that I believe ...but not by a huge amount.

Mind you Michael Jackson started at 5.

It's all about the music. Although not being exactly original, Do It Well makes us buzz a little.

man, she sucks! i was meant to be her keyboardist - thank goodness I turned her down.

Did you guys happen to save any of her old Myspace demos? I found "Do It Well," but the others - like "Pop Princess" and "Jungle Time" are impossible to find. Any chance you could help us (the Charli fanbase) find any more of her old songs?