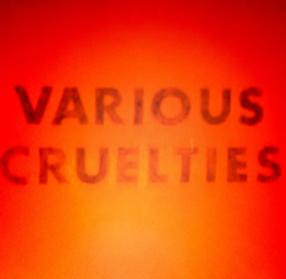 If classic Brit-Pop is your musical cup of tea, then right now when a band like Brother are being hailed as its next big things, you can easily be forgiven for thinking the genre is dying. There’s a fine line between parody and revival; to revive something there has to be a new flavour or twist and so far Brother haven’t changed the recipe at all.

However, fear not because there are bands out there that are far less underwhelming than Brother who, if we wanted to generalise, we could put into the Brit-Pop category. One is the much Breaking More Waves blogged band The Milk, who stomp with northern soul swagger over all of the opposition, and the other is Various Cruelties. Like The Milk, Various Cruelties have soul engrained in their tunes, although their blend is less rowdy 60’s r ‘n’ b – instead it’s more gentle crooning in a working mens club. Various Cruleties write Brit-Pop but seem to take very different influences from the usual Oasis / Libertines copyists who blight the world with their lack of imagination. Plus they write really good songs.

Having first featured the band back in January, today we’re streaming the new single that the group are releasing on the 23 May. The A-Side Neon Truth is gloriously uplifting, full of jangly guitars and an ending call of “I still love you, I love you, I love you, I do.” At under three minutes the song does what it has to do but never outstays its welcome. B-Side She Is The One is just as good - a gorgeous ballad perfect for the last couple on the dance floor to embrace to under a single spotlight before they make their way home.

Move over Brother. Your time is up.

SHE IS THE ONE by variouscruelties
Posted by Breaking More Waves Blog at 00:01