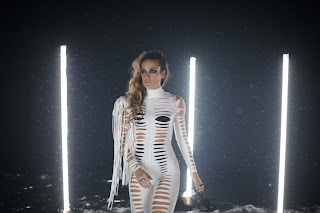 The last time The Cure’s A Forest was given a moodily great electronic re-work was on the bands own Mixed Up remix project. At the time their imaginatively (?) named Tree Mix gave the song a 7 minute extended treatment that didn’t stray too far from the original to upset Robert Smith aficionados, but was enough to get shoulders frugging on the dance floor.

Now ex His Girl Friday singer Jess Mills has joined up with Breakage to provide her own take on the song as a bonus track on her Vultures single (which we featured here). As you would expect from Breakage layers of mystery and menace are added bringing the track bang up to date. It’s tremendous stuff.

The Cure are scheduled to play their only scheduled show of the year at Bestival on the Isle of Wight and Jess and Breakage will also be there. Maybe Robert might take a sneaky peak at Jess’s performance? And if you do Robert, why not check out Breaking More Waves very own DJ side project – The Sunday Best Forum Allstars – who will also be playing in the Big Top on the opening night of the festival , last year we dropped a Cure remix into the end of our set! Maybe this year we'll play this one?