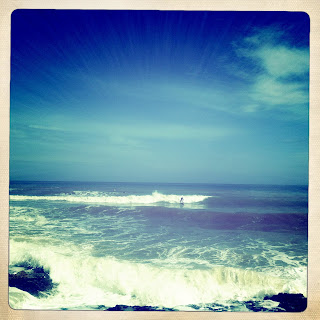 Welcome to our new regular Saturday feature titled The Saturday Surf. Every week we listen to a lot of new music. Only a tiny fraction of it makes it onto the blog. The Saturday Surf is a weekly sweep up of some of the best of the rest - a gentle skim of a number of songs that didn’t quite get their own individual post.

For this regular column we’ll never post too many tracks in any one week so as to not take up too much of your time – 5 will be the maximum - and much like the rest of Breaking More Waves the music chosen will not be from any particular genre. So expect our usual mix of folk, electronica, pop, indie, maybe even some hip hop or experimental oddness from time to time.

The only criteria will be that each and every piece of music gets our approval and is 100% amazing. The weekend really does start here.

First up is indie-electro-dance-pop (that’s a fair few bases covered) group Strange Talk from Melbourne, Australia, whose song Climbing Walls has been kicking around for some time now, being one of the highlights on the 2010 Kitsuné Maison Compilation 10. The track is now being given a further release through Neon Gold on the labels first ever vinyl and CD release. It’s got choppy guitars, cascading synth stabs and plenty of rhythmic synergy. If you haven’t heard Climbing Walls yet, and enjoy the likes of Friendly Fires, Phoenix and French Horn Rebellion, now is the time to fully acquaint yourself.

Next comes something from the opposite end of the musical spectrum. Way back in December 2009 we named Beth Jeans Houghton, the Geordie lass who was making oddball Celtic folk music, as one of our Ones to Watch for 2010. Since then there’s been diddly squat from her except for a tour with Stornoway and a few festival appearances, although we should have taken notice when she sang "I will return." Finally she’s secured a deal with Mute and a Ben Hillier (Blur, Doves, Elbow) produced album is readying itself for release, although you will still have to wait until autumn to get that. Dodecahedron is the first slice of multi-sided folk-pop to be released from it and is available as a free download by clicking on the arrow on the player below.

We featured Picture Book as a new wave at the start of the year and now a new demo has surfaced from the Liverpool based three-piece. “Can I kiss you tonight?” lead singer Greta asks before leading us to the dance floor and musically sticking her tongue down our throat, which is absolutely fine with us. Take us home now please. Musical underwear may be coming off soon.

Finally, we leave the best to last. Canada’s Austra is another act that first featured on Breaking More Waves back in January before a Hype Machine frenzy gradually grew through February and into March with this track – the groups signature tune - Lose It. Music bloggers can often get too wrapped up into being ‘the first to post’ about a particular song. We’ve said it before and we’ll say it again, the most important ingredient of music is time. So, we’re swinging the spotlight back onto Austra slowly, confident that after a couple of months of listening their Zola-meets-Florence-operatic-electronica is 100% worthy of the buzz. Lose It elevates Austra above cult status, even if it does sound a little like the the Lloyds TSB For The Journey advert (here).