Music That Made Me #15 - Underworld - Born Slippy 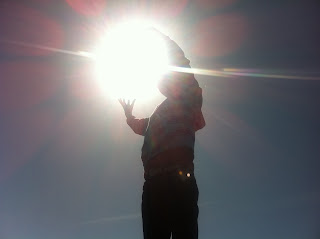 Music That Made Me is a weekly personal and autobiographical dip into the ocean of memories and music. Its intention is to look back and celebrate some of the songs that have provided the soundtrack to my life. The picture above is of my eldest daughter, now aged 12, 'catching the sun'.

In 1997, on New Years Eve, or Hogmanay as she would prefer to call it, my girlfriend jumped suspended only by a bungee cord off a high rise platform in Queenstown, New Zealand. Exactly one year later she gave birth to our first daughter.

In life before children I had never given a thought to becoming a father. When we first told people of our impending new arrival the reactions verged from happiness to a state of shock. For those who were used to seeing me at the latest London indie club necking lager and my girlfriend out on the town in the latest trendy Soho bar, cigarette in one hand, bottle of red wine in the other, the idea of the two of us becoming responsible adults seemed near impossible. If truth be told, we found the idea pretty incomprehensible ourselves. The jokes about how long it would be before Social Services were called were probably a bit too close to the truth. It’s 100% true that the day that my daughter was born was the first day I’d ever held a baby.

Yet that day, something changed. As clichéd as it sounds I felt absolute and instant love – a natural rush of chemicals through my body that I’d never experienced before. I remember the midwife passing me the baby and being shocked at how wide her eyes were – I’d been led to believe that babies were born all puffy eyed and red looking – yet here was this beautiful tiny little thing looking up at me with the widest eyes I’d ever seen, staring straight into mine. It didn’t feel at all how I’d expected it to feel; awkward, terrifying, me a useless father. It felt completely natural, exciting and absolutely incredible.

That night I drove the short distance home to our humble 1 bedroomed modern flat in Slough, Berkshire whilst my new family rested in hospital. I was absolutely buzzing and as people scurried down streets, their breaths streaming above them, I was completely unaware that it was New Years Eve. I’d been awake for over 50 hours by this point and should have been sleeping, but my body was still bursting with adrenalin. Eventually I began to drift off and in my slightly addled state of mind heard fireworks in the distance – I honestly thought that they were celebrating the birth of my daughter.

A couple of days later my girlfriend and baby came home. It felt so calm, so relaxed. It wasn’t the hell on earth that everyone had told me it would be. Both of us found that actually, dealing with a new born baby was OK.

Every new parent struggles with sleep to a certain extent, but we found a number of tricks to get our little one to drift off; the vacuum cleaner switched on, the continuous whir of extract fan in the bathroom and to my absolute pleasure – music. Yet rather than sweet nursery lullabies we found the best song to get our daughter to snooze was something that two years before we’d been punching the air to in clubs such as Popscene ‘the dance club for people who like bands’ and Blow Up - the track that the seminal film Trainspotting had made famous -Born Slippy by Underworld.

Email ThisBlogThis!Share to TwitterShare to FacebookShare to Pinterest
Labels: Music That Made Me, Underworld