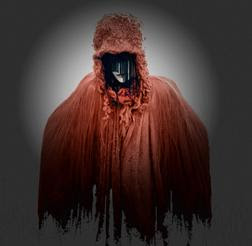 Gazelle Twin creates dreamlike miniature electronic symphonies that sound like they’ve been touched with the dark sonic caress of Fever Ray. Her music is edgy but strangely mesmerising – the soundtrack to some sort of gothic, foggy, hallucinogenic nightmare. If we didn’t know better we would imagine that Gazelle Twin (real name Elizabeth Walling ) came from some sort of gloomy eastern European city of concrete and cold or somewhere where the winters are long and black – Scandinavia perhaps. Yet Gazelle Twin is from neither of these places – instead hailing from the seaside town of Brighton, UK – a place more often stereotyped for its big gay scene, its dance culture and its cool indie guitar bands.

Yet Brighton offers much more diversity than this and there is most definitely a darker mine of material crawling out from the place – maybe it lurks below the funfair frivolity and kiss-me-quick cheekiness of the town’s pier, waiting to shuffle out onto the shingle beach and into the streets under the cover of moonlight?

Other nightscape bands we’ve featured on the blog in the past such as Esben and the Witch and Dark Horses also come from Brighton and it would be very easy to cage Gazelle Twin in with these groups and define it as a scene. Yet we suspect Walling, who describes herself as a singer, composer, performer, producer, filmmaker, visual artist and Renaissance woman would have none of that. “I just became totally sick of playing by the rules with the local music scene and its many cliques,” she said last year to The Quietus. So instead Walling went off and created Gazelle Twin – a performance art project where she uses disguise to cover her face and alter her form during her shows. The first one of these was at the now defunct Shunt Vaults under London Bridge where she confused and confounded the audience with her strange homemade costumes and gloom-wave electronics.

Having released her debut single Changelings last year she is about to follow it up with the musically unsettling I Am Shell I Am Bone. Full of brooding synths, clattering percussion and haunted otherworldly vocals, the song veers so close to the territory of Fever Ray that at first we wondered if it was a new single from Karin Dreijer Andersson herself. The single is released on 25 April 2011 by Anti-Ghost Moon Ray Records and we’re streaming it together with Changelings below. And if you’re going out in Brighton tonight, don’t stray too close to under the pier – who knows what else may lurk under there.

Gazelle Twin - I Am Shell I Am Bone