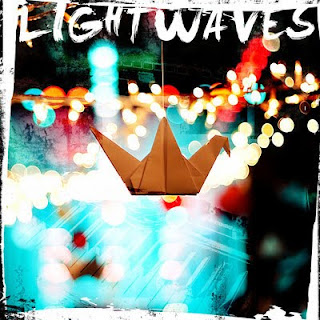 Who remembers Yes Giantess? Way back in 2008, when this blog was in its infancy, we put the Boston Massachusetts electronic four-piece, then known as just Giantess in our Ones to Watch for 2009 list. Then as 2009 developed, they put the yes at the front of synthpop and got booked to play the NME Radar tour in the UK alongside the likes of Marina and the Diamonds and Local Natives. In terms of big electro thrills at least three of the bands songs, the heart melting / love making Tuff N Stuff, the dirty flutters of The Ruins and the hot-blooded When The Sun Gets Low defined the period from 2009-2010 in these quarters.

However despite these head for the stars pop thrills the Yes Giantess album Siren never got a big release, quietly sneaking out on I-Tunes and the spaceship never lifted off.

Now we’re pleased and excited to see that the music continues. Lightwaves is the new DJ / production project from Jan Rosenfeld, the vocalist of Yes Giantess. His debut single follows remix work for the likes of Freelance Waves and Savoir Adore and it’s a funky piece of vocoder / robot work-out entitled Working All Day. There’s still a hint of the Yes Giantess sound in so far as this song has a euphoric drop and build, but Working All Day has an even more bound for the disco Daft Punk funkiness that delights in all the right places, namely the hips and the feet.

Lightwaves - Working All Day by lightwavesmusic
Posted by Breaking More Waves Blog at 20:30

Email ThisBlogThis!Share to TwitterShare to FacebookShare to Pinterest
Labels: Lightwaves