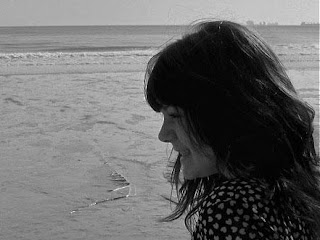 We’re suckers for cute sounding female vocals and sparse simple arrangements, so today we present a new wave that falls firmly into this category. Alice Jemima is a 17 year old singer songwriter from Newton Abbot, Devon, UK, who plays music that will make you go weak at the knees and sigh words like ‘lovely’ and ‘charming’. Alice is still very fresh and a developing artist but there’s something delicate and winsome here that deserves to be allowed to grow.

There’s a similarity between Alice and another artist that we’ve featured a number of times at Breaking More Waves – Misty Miller – in that they are both slightly quirky, girlish and old-fashioned sounding. Both are doing something that is far removed from the grotesque Rihanna styled bumping and grinding that so many teenage girls seem to aspire to and with 10 year old girls signing record deals, wearing designer labels and releasing pop music videos it’s refreshing to see young singers growing their song craft in a more natural and organic way.

Alice’s biggest claim to fame to date is that she was selected as part of the national London 2012 Cultural Olympiad project to help in the unveiling of the Olympic rings at St Pancras international station in London in front of Seb Coe, Chair of the London 2012 Organising Committee and Mayor of London Boris Johnson. She performed four songs there. We’re not sure how much Lord Coe and Boris Johnson know about music, but if they do they will have noticed the uncanny resemblance to Emilíana Torrini in Alice’s vocal and sense of mature restraint in her songs. Listen to Ain’t It Funny which we’re streaming below and watch the video for Won’t Take You For Granted and you’ll see what we mean. Just simple plucked guitar with minimal violin backing (on Ain’t It Funny) these songs really are quite delightful.

Aint it funny by Alice Jemima