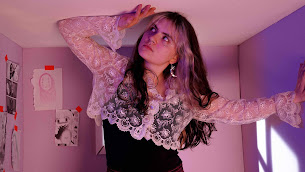 It’s time to introduce a new artist who you’ll probably find adjectives such as swirling, shimmering, ethereal and blissful thrown at more times than 10 Downing Street (now known as the Tory Hacienda) had parties during lockdown (eg: quite a bloody lot). Why? Because Cruel Sister (real name Faith Nico) from Dublin does a nice line in the sort of shoegazey noise-pop that was once the domain of the likes of Curve and Ride and more recently has at least in part been rejuvenated by Wolf Alice.

Having put out a couple of tracks last year, Cruel Sister’s third release shows there’s still life in guitars, reverb, distortion and delay combined with some pretty vocals. The song in question is called chihiro, named after the lead character in Studio Ghibli’s Spirited Away (Faith’s favourite film) and is taken from her debut 5 track EP released this September.

Lose yourself in this artist's dark but beautiful wash of sound. There's a claustrophobic video as well which has shades of The Cure being stuck inside a wardrobe on Close To Me (view here) and Chihiro can also be found on this week’s Breaking More Waves New Music Weekly playlist (here).