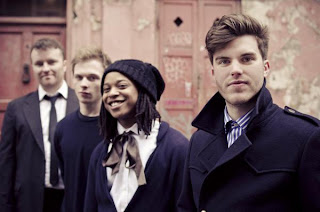 Matthew Phillips, lead singer of Kites is a self-consciously melodramatic entertainer if ever there was one. Just take a peek at the blog he types on behalf of his band. “I write this entry as a witless nincompoop, unworthy of sympathy or misguided admiration,” he starts on one particular post entitled A Dedicated Follower Of Death – A Tale Of Mindless Stupidity. Later he vents frustration over what he sees as the countries army of cloned bibliophiles, all reading the same books on the tube; Stieg Larsson, Dan Brown and the latest Vampire-inspired trilogy. We think we can safely say that Matthew is unlikely to ever become a one-dimensional "I love my fans" pop star, but a fascinating pantomime pop poet he could be.

Matthew takes his sense of theatre into his groups music as well. You can hear it on their new 4 track demo EP KIT0003, unleashed to the world just a few days ago. The Disappearance of Becky Sharp, which we mentioned in a previous blog about the band is the stand out track, placing itself musically amongst the likes of The Human League, Heaven 17 and Depeche Mode, with an obvious New Romantic seriousness. Another song Art Tastes Better Blind, which also streams below, is a stately piece of black celebration synth-pop that delves deep into the UK music scene’s eccentric pop heritage.

The way that Kites project themselves is almost ludicrous, in the same way that when Hurts started releasing material they managed to wind people up with their elaborately camp pretension. This, we believe, is a good thing. Pop music needs to outrage, it needs stars with personality, it needs to shine with dazzling peculiarity, for otherwise all we’ll be left with is the likes of Westlife and The Saturdays. And nobody wants that do they? Now here's the music.

The Disappearance of Becky Sharp by Kites
Posted by Breaking More Waves Blog at 21:30