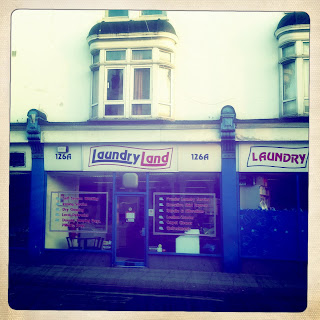 Cross-pollinating the worlds of indie and the jit of Zimbabwean afropop, London / Walsall three piece Real Fur’s debut single Animal is a jaunty and joyful song that flirts with the feet. It’s highly dexterous and damn danceable. Yet beyond its up-tempo tropical slice of tunefulness, it’s the bands gigs that have been turning heads, for Real Fur have stepped away from the sweat and beer of indie toilet venues and instead embraced the smells of soap powder and warm washing by playing in laundrettes.

The last time that the public got excited about laundrettes was back in the 80’s when Nick Kamen stripped off his jeans and gave them a spin in an advert for Levi 501’s. Whilst the members of Real Fur are very much keeping their clothes on, the group are using washeterias to perform in as a bid to do something a little different. Bassist Matt McGough told the Evening Standard last year “People dance on the machines and are really excited by the venue –it’s great.”

We’re not sure if this unlikely use of such buildings is some deep well thought out manifesto from the band highlighting how the rise of the domestic washing machine has reduced laundrette numbers in the UK from around 12,000 in the early 80’s to around 3,000 now or simply a gimmicky way of grabbing media attention, but either way its working, with Real Fur creating a smouldering buzz that will probably grow.

Of course playing unusual spaces is nothing new – bands have played gigs in libraries, museums, castles and even caves – but ultimately these gigs succeed or fail in the same ways that gigs in traditional venues do. If the acoustics, atmosphere and music isn’t good enough the space you’re playing is almost irrelevant. The excitement of the new – rather like a first date – soon wears off if the moment can’t deliver. Laundrettes certainly have some limitations – traditional ones tend to be designed as an architecturally narrow space which can mean a cramped audience and poor acoustics. Yet thankfully from the songs we’ve heard such as the taught riffed cowbell laden Birds, which has a funky whiff of Talking Heads about it and the aforementioned carnival good times groove of Animal there’s every chance that Real Fur could clean up wherever they play.

If you want to catch Real Fur in a Laundrette their Safari Funk tour hits , Southsea (about 10 minutes walk from Breaking More Waves HQ in the laundrette pictured above), Brighton, , Sheffield, and this May. Check here for full details.

Hey,
I'm really digging the audio player. It's the first I've come across it. Is it a plugin or something?

All you need is at their site :

I'm digging what the audio player is playing..