Music That Made Me #16 - The Wombles - Remember You're A Womble 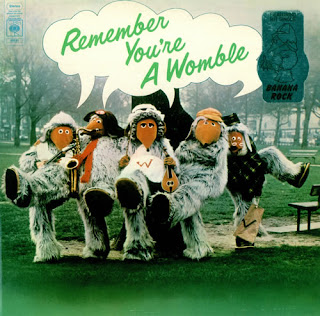 This series wouldn’t be complete unless I included my first single purchase. It’s an important nostalgic landmark that every music fan can remember, in a similar way to the first ever album you bought. I’m not so sure if the first track you ever downloaded seems so important or memorable.

I’d love to claim that as a child of the 70’s and 80’s the first time I stepped out of a record shop clutching a 7” vinyl single and rushed eagerly home to play it on our old record player that sat inside my mum and dads Brazilian Chestnut cabinet in their living room, my selection was something cool and enlightened. White Riot by The Clash, I Feel Love by Donna Summer or Hong Kong Garden by Siouxsie and the Banshees perhaps. But it wasn’t. In fact my first ever single wasn’t even bought in a record shop.

I was 5 years old and was in Army & Navy, a department store in Camberley. Somewhere towards the back of the store was a box. A crumpled and worn box of records. I don’t even particularly remember the shop having records on display, but I do remember the box – stuffed full of vinyl singles, some with their original cover missing, covered only in a plain white paper sleeve. I think they may have been sale items, for certainly over the years there was an odd selection of hits and misses and I remember that they were very cheap. Every weekend or so, whilst my mum completed her weekly shopping I’d rummage through this box, finding bargains galore for 10p each.

I’d buy them with my pocket money – enough change left over for sweets and a comic too. Often I’d never heard the song before – but I’d like the sound of the title, or the picture on the sleeve and choose on that basis. This habit would die with the age of the download. It led me to develop at a very early age an eclectic and slightly odd record collection. Somewhere along the line, from this box I’d pick up ELO’s Don’t Bring Me Down, XTC’s Senses Working Overtime and some early Queen singles. Oh and Shakin’ Stevens as well.

But before all that, the first ever single I bought was Remember You’re A Womble by The Wombles; the pointy nosed, Wimbledon Common living kids TV program creatures turned pop group. It wasn’t the coolest of choices, but when you’re 5 years old all you want is a catchy song ‘sung’ by your favourite stop motion TV characters. What was extraordinary about The Wombles was that they were no novelty one hit wonders. In the 70’s they clocked up a hit after hit, with 4 Top 10’s and a further 4 in the Top 20. They also managed to have 4 Top 40 albums, one of which stayed in the UK charts for more than half a year. Let’s put that in perspective – they were more commercially successful than the likes of Arcade Fire in the UK. In defence of The Wombles their TV motto was “Make Good Use of Bad Rubbish,” which with its green ideology was way ahead of its time. The record itself came in a plain paper sleeve and I took it home, traced some pictures of the Wombles from my Womble Annual and designed and coloured in my own cover art – just like D-I-Y indie records years later.

Incredibly, this year sees the return of The Wombles, where they will be ‘playing’ the Avalon Stage at the Glastonbury Festival. It goes without saying, that if you’re going, I’ll be right down the front dancing like a lunatic. It’s going to be Womble-Mania all over again. Remember you’re a Womble.

Email ThisBlogThis!Share to TwitterShare to FacebookShare to Pinterest
Labels: Music That Made Me, The Wombles