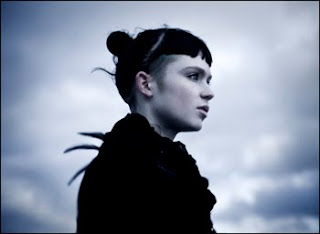 Today in what could be perceived as a desperate attempt to repatriate ourselves into the world of cool new music bloggers, nuzzling up with big internet-doggy-eyes, we’re featuring Montreal based ethereal electronic songstress Claire Boucher aka Grimes. This of course would only be repatriation if we were both desperate and once-cool, neither of which would be correct. Yet just the other day we inferred that the hippest bloggers were posting about the likes of Wu Lyf, Odd Future and Grimes (here). Now lo and behold now we’ve achieved 1 out of 3. You may be waiting a long time for our Odd Future post though. (Get out of jail card - we reserve the right to contradict ourselves)

Floating out there, full of childlike ghostly vocals, Grimes makes pop music that sounds as if it’s from an abandoned spaceship. A slender one woman performer her voice is like a scary and otherworldly Lykke Li with machine beats and splurges of electronics, the link between her vocals and the computerisations being almost seamless – you don’t know where one starts and the other ends. Having already released an album entitled Halfaxa that sports some of the strangest looking titles for songs ever - ∆∆∆∆Rasik∆∆∆∆ and ≈Ω≈Ω≈Ω≈Ω≈Ω≈Ω≈Ω≈Ω≈ for example, you’re unlikely to hear DJ’s name these tunes on the radio. In fact, you’re unlikely to hear the songs on the radio at all. Grimes is very much blog pop – quirky, unconventional, a little bit experimental but still accessible, particularly on new song Vanessa her most commercial track to date, which we’re streaming below. Elsewhere you get tracks like Weregild which sounds like a warped marching robot disco and Dream Fortress which is celestial operatic ambient electronica with a wash of new-age over the top. Grimes will not be for those who like a catchy song with a hooky melody, but for those who like to plunge naked into deeper darker waters and let the current pull them along, Grimes is worthy of the jump.

For those like Breaking More Waves who are based in the UK, Grimes will be hitting these shores in May for shows in London, Brighton’s Great Escape and Liverpool’s Sound City.

Email ThisBlogThis!Share to TwitterShare to FacebookShare to Pinterest
Labels: Grimes