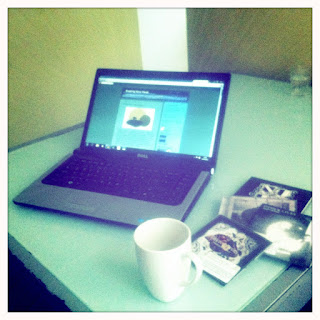 Besides the “How do I get my music featured on your blog?” question, which we answered here, the other most common question we’re asked is this one. “How do you keep the blog running with such regular efficiency?”

As we’ve alluded to before, Breaking More Waves is very much a ‘hobby’ blog. Some blogs are effectively side projects of those who work in the music industry, others are those of authors who are attempting to showcase their journalistic or web design skills as part of their CV for eventually finding a job in the media, for others it’s a tool to network themselves into new possibilities within the music industry, but many, like us, simply blog to convey their unending passion for music – be it pop, rock, folk, electronica, hip-hop, experimental or any other genre or cross-genre with no other end vision.

This passion means that whenever there is spare time in between the pressures of the ‘real’ non-internet world – career, family, domestic and social lives, we’re probably listening to, watching and discovering new music.

So let’s throw open a secret of how we work. First, unlike many blogs we don’t write something daily – the busy life we lead doesn’t allow us to. It’s not because we’re not organised – far from it – just that we’re extremely busy. Count up the number of regular solo ‘hobby’ music bloggers that continue to run their blog with a family of 2 children and a full time professional job and you’ll see they are significantly less than those without. It probably explains why even the best ‘hobby’ blogs only last about 4 or 5 years. When bigger responsibilities come the author’s way they find it difficult to keep on top of a music blog as well.

Instead of writing daily we pre-write a number of blogs, usually early on a Saturday morning, whilst the rest of the world is sleeping and schedule them for uploading for the rest of the week, to make it appear as if we’re writing daily. Yes basically we’re one big cheat. Then amongst these pre-writes we drop in the odd piece that we write during the week, often in our lunch hour at work, to keep the blog relatively fresh and on the pace – the internet after all is a very fast moving monster.

Yet this weekend the very astute amongst you may have noticed that we’re posting significantly more blogs than we normally post at the weekend, at various points throughout the day. This is because we’re having a spring clean. We’re shortly going to be taking a short break from the blog for a family holiday and before we do so there are a number of bands / artists that we had wanted to post on that we hadn’t quite got round to. So to avoid them slipping away off our radar by the time we get back, we’re throwing out a number of blogs this Saturday, which by the power of the internet magic appear to be written at different times but of course they weren’t – we’ve been cheating again.

So now that we’ve explained what a sham this blog actually is, we’re finishing off our spring cleaning. These artists have been sitting on the ‘really must write a blog about them’ pile for quite a while now and it’s never happened. So instead we’ve bunched them together on this final Saturday post – there’s still a couple more posts to go after this but then we shut down for a bit.

First there’s Braids, the Canadian four-piece who produce slightly experimental dream-pop. Key track right now is Lemonade, a song that slowly wriggles its way out of its cocoon before gently flying away like a butterfly.

Second there’s the somewhat noisier Mammal Club, another band from the North East of the UK, an area that seems rich and vibrant with talent at the moment. We’ve already been smitten by the likes of Lanterns On The Lake, The Unthanks, Polarsets, Let’s Buy Happiness and Brilliant Mind and now it seems that we can add Mammal Club to that list. There’s a similarity to Everything Everything in places but there’s more structure and the vocals are a little less silly than the Manchester band.

Finally with another shelf almost cleared have a listen to something far removed from the other two bands in this post, and probably our favourite. High For This by The Weeknd (yes the e is purposefully missing) is an incredibly dark moody piece of club come-down music laced with space, crisp beats and immaculate slow-core r ‘n’ b production.

The Weeknd - High For This

There, that was kind of fun. Maybe we should round up every week with awesome tracks we haven’t had time to blog properly like this every week after our return? Now there’s a thought blossoming. All we need is a feature name. We’d probably do it on a Friday. Any ideas?

Really interesting article. Never thought about how / when bloggers work.

Always good to hear the perspectives and attitudes of other "hobby bloggers". There aren't as many of us as you would imagine...

Cheers guys. Tim - it's an interesting point - sometimes I think its not always clear which blogs are 'hobby' blogs and which are actually 'industry' blogs or those trying to make it in the industry. Not that it actually matters though, ultimately its all about the music. However I do think 'hobby' bloggers are important becaause they can bring different perspectives and occasionally 'discover' great new music before the industry does.

I appreciate the time and work you have put into your blog. I hope it becomes one of the best blogs on the net. You guys have a great appreciation of different kinds of music. I have been listening to the music on here and it rocks.

Lately, I'm trying to make a blog for music. Yet how unlucky I am that I can't do it just easy as what I think before. These shared ideas could be an aid for my problem. I will work on it again later on.

yeah it doesn't matter because no good bloggers would ever be shills for whoever pays their bills. Different perspectives are always a good thing.

True independence does make hobby bloggers closer to fan though in my opinion, which is how music blogging started out of course.

Your blog is a regular hit for me. I love your eclectic taste and you have introduced me to many artists over the past 18 months that i would never have found myself. Keep up the great work, your passion shines through and you are, in my opinion, an incisive and fair critic.

Thanks Anon. Comments like this make it all worthwhile. How lovely. Wish you had said who you were though !

Yeah, I can see that 'anonymous' is really impersonal particularly on a blog that is so personal ! Bu the way have you guys ever checked out a band called Hope and Social? http://www.hopeandsocial.com/. Really interesting story - fan funded record label and 'pay what you can afford' for their music. Great live shows and musically can be truly inspiring.

Robin - as a long term reader of the blog also i'll add that i love these more personal articles. Your blog is one of the few that is how I believe a blog should be really, representing your personality and tastes, the music that made me articles are some of my favourite.