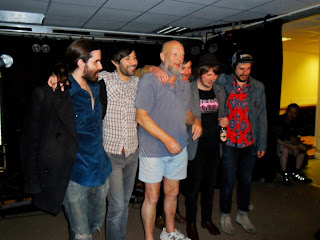 Last night the live final of the Glastonbury Emerging Talent Competition took place at Pilton Working Mens Club, Pilton in front of a specially invited audience, which included Breaking More Waves, following our involvement in the judging of the first round of the competition.

The evening was a wonderful night of live music, with the quality being exceptionally high both in terms of the sound and musical competence of the bands. It was so high that afterwards Michael Eavis, founder of the festival declared that all of the other 7 finalists who didn’t win would get a slot on one of the stages at the 2011 event – a first in the history of the competition. Here at Breaking More Waves we’d like to think that the involvement of much of the cream of UK music blogging in the judging produced a longlist of considerable merit that gave the final judges lots to work with.

The very worthy winners of the competition was west London 5 piece Treetop Flyers who produced a set of such calibre and ability that it made you wonder why they weren’t already booked for the festival and had to go through the competition route. The bands sound hints at the likes of Crosby Stills & Nash, Neil Young, My Morning Jacket and one track - their opening song last night - Mumford & Sons. They were a very popular choice in the room – their set being blessed with power and warmth. You can grab a free download of the bands song Long Cold Winter from their forthcoming four-track 10" on Communion Records by clicking here and can hear their stunning tune Mountain Song, an older track from their repertoire below.

Finally, a quick note about two other bands that played. The beautiful Emily & The Woods sent shivers down the spine with her intimate jazz tinged acoustic folk and breathtakingly subtle voice, whilst Louise & The Pins blend of acoustic 50’s / 60’s inspired doo-wop, folk and harmonies made a vintage sound feel very alive again. We’ll be featuring more of these two artists in the very near future on Breaking More Waves.

But the band of the night was Treetop Flyers (pictured above with Michael Eavis after winning) and their prize is a slot on the main stage at this year’s Glastonbury Festival. They were truly worthy of Worthy Farm.