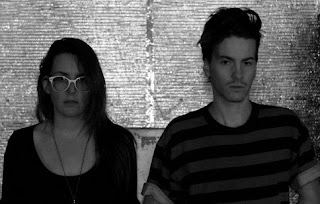 Earlier this month we posted a well-received article aimed at artists entitled How To Get Your Music Featured On Blogs. Included in the piece was a darkly electronic song that used a backdrop of tastefully minimalist 80’s synth sounds, slow-techno and cold wave – like a valium slowed Crystal Castles track sung by a beautifully restrained Phil Oakey or Dave Gahan in a lounge suit. It was the kind of thing that could have come out of the UK, Germany or Poland perhaps. Yet the duo that created this music – Trust - are from Canada and the song in question - Candy Walls – is released worldwide this week through Sacred Bones records.

Formed in 2009 Trust are Robert Alfons and Maya Postepski. They began writing songs about nostalgia, lust, and erotomania together and now Candy Walls is the first public release of their passions. The duo has played gigs with the likes of Glass Candy, Hercules & Love Affair, Washed Out and Zola Jesus in their home town of Toronto and has just completed shows at South By South West.

As Candy Walls was embodied right at the bottom of a previous long discursive article and may have been missed, we’re highlighting it again and this time featuring the video – which despite its simple motor bike journey road trip tale hints at something more nightmarish underneath. There’s also another track – Gloryhole – which continues the slow motion Crystal Castles vibe.

Email ThisBlogThis!Share to TwitterShare to FacebookShare to Pinterest
Labels: Trust