The Overexposure Of Jessie J ? 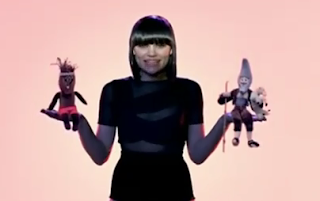 Recently there have been a number of articles published on Jessie J’s rapid rise from industry secret to (arguable) overexposure and commercial success. In the UK she’s already had a no.2 hit with the slow burning hit Do It Like A Dude and a no.1 with Price Tag, a no.2 album with Who You Are, a Brit Award and topped the BBC Sound of 2011 poll. As Rebecca Nicholson noted in this weeks Guardian Guide “she stomp-stomped, she arrived, and then, with impressive efficiency, she squashed into half a year the starry antics most artists take 20 years to pull off.” With performances on Saturday Night Live, Later With Jools , constant rotation on UK radio and a growing presence on pop and digital stations in the US, Jessie J is all over the place. By Christmas she’ll probably have released her Greatest Hits album.

It’s inevitable with such an accelerated pace of promotion that Jessie J is going to find haters. Drowned In Sound and Pitchfork have waded in with 1 and 2 out of 10 reviews, hardly surprising given their demographic of readership and journalists, and whilst we would certainly agree that the album is no masterpiece (we'd give it 3.5 or 4 - so let's call that 3.75) and that as a pop personality Jessie J is pretty insufferable, the fact that the two singles released so far have sold well would suggest that someone likes what Jessie J is doing – even if established critics don’t. Price Tag is, let’s face it, a hooky commercial pop song and is always going to be enjoyed by the mainstream more than the new Josh T Pearson record.

Earlier this year we attended one of Jessie J’s gigs to fully form our own opinions. It was certainly one of the strangest shows we’ve been to in some time; it felt more like a record company PA than a gig, but with higher levels of excitement, although there was no teenage pandemonium. Of the 8 or so songs Jessie J performed, half of them were X-Factor-gone-to-the-nightclub karaoke sing-alongs over a backing tape, whilst the others were performed with a solo acoustic guitarist – allowing we suspect Jessie J to display her ‘realness’ and ‘vocal talent’. There’s no doubt that Jessie J can warble and hold a tune albeit with a significant number of Mariah Carey style histrionics emanating from her huge gob. After forty minutes or so of screaming, whooping and filming the whole thing on their mobiles the youthful audience went home happy. However one thing that came across at the gig was that Jessie J was incredibly determined and wanted her fans to know just how hard she had grafted to get where she was. “There was no one here last time I played here” she recalled of her time playing alongside JLS in their previous pre X-Factor incarnation of UFO at the same venue a few years before.

Earlier this year we asked the question “can she now maintain a longer term career? Even in the world of commercial pop, talent isn’t the only factor that counts.” It seems now that this question is almost irrelevant. Like Sandra Bullock on the bus in Speed, Jessie J has her foot pressed hard down and has no reason for braking.

So what’s the motivation? Why is Jessie J so greyhound determined to achieve commercial success so quickly now that she’s out of the traps? Maybe it’s the fact that when she was 11 she was diagnosed with an irregular heartbeat and when she was 18 she had a minor stroke. She started recording her album 6 years ago and has been on the cusp of getting a release a number of times before Who You Are finally got the big push at the start of this year. Her poor health and her nearly-made-it-before status make Jessie J a highly driven artist full of mettle – something that in some quarters of traditional rock journalism is seen as a negative. It’s why Pitchfork described her as ‘over-eager’. But when your eyes have been opened to the fact that maybe you won’t be around as long as you would like to be both in terms of mortality, then it’s time to speed things up before it all comes crashing down. Likewise Jessie J is astute enough to realise that the commercial life expectancy of the typical pop star is incredibly short - from fresh faced teen idols in the fifties and sixties to phone-vote chart favourites of the X-Factor generation – so best to hammer home the music now before the career takes a nose-dive as has that of many other pop princes and princesses before her.

So irrespective of what you think of Jessie J’s music, criticising her for working hard and being overexposed now her opportunity has come seems a little pointless. If you don’t like it when she’s on the TV / Radio or the like you can always turn off.

As a matter of fact, I will turn it off as long as her music sounds manufactured. I've heard it and seen it before Jessie J, give me something new and true. And stop with the damn costumes! Leave that to Rhianna and Lady GaGa.

Interesting post and comments.
I feel the same way as Moli, yet when asked the question of 'what sounds manufactured' I've had to stop and think!
I guess there's a generic 'radio hit' sound applied, of which some of the factors are: massive compression for maximum loudness in both track & vocals alike; treble emphasized on vocals so it cuts through wherever you're listening; 'over-production'; and the fact that the lyrics are focused on appealing to the listener (as opposed to expressing the singer's thoughts/feelings/...).
All of these 'manufactured' elements actually aim at one thing only: to be heard and liked by as many people possible.
That is a fine goal, but that to me is what distinguishes a 'manufactured artist' from 'an artist'. An artist uses art as a medium of self-expression ('self' defined in a wide way; whatever they feel has to be expressed - not necessarily their personal journal material but also world view, politics,...) whereas a 'manufactured artist' uses art as a medium for marketing themselves. In a way, many pop songs these days are just marketing tunes for the brand of the artist - musicality in composition does not matter as much as 'hooks' and 'catchiness' which are treated as an end in itself, not as a medium of expressing something more noble, bigger than more important than another advertising brand. Manufactured artists are like glorified washing liquid.
However, I feel Lady Gaga differs from 'manufactured artists' and is definitely very much of a true artist. Her lyrics and sound seem to come from a more personal and original point of view.Personally I think this is truly why she is more succesful than all the other women popsters out there - she has transcended the line to authenticity ( and credibility), and people can sense this.
Would love to know what both of you think of this.

Great comment Liisa and I think you’re pretty much bang on. The word ‘manufactured’ gets banded around a lot in terms of pop music, mainly because pop music is generally to do with recording, production etc rather than live performance – you mention production techniques such as massive compression for maximum loudness in both track & vocals alike; treble emphasized on vocals so it cuts through wherever you're listening etc. These are ‘manufacturing’ processes used to get radio play and the songs are written in a way that follows a trend in an attempt to be popular rather than any deeper artistic merit of ‘doing your own thing’.
Personally I have no problem with manufactured pop music (or manufactured music of any kind) if it moves me or grabs me in some way – that can be to make me happy, sad, make me want to dance, make me think about the world etc. However I also love music that has deeper artistic merit, that of self-expression you talk about.
So is Jessie J ‘manufactured’ ? Well certainly the production of the album is such, and she’s had a huge amount of industry backing to develop her so that she becomes popular, so I guess she is.

However, personally I wouldn’t turn manufactured music off just because it is – I’d listen and then make my mind up if I liked it or not.

Thanks for the comment!
You're right, 'manufactured' doesn't equal 'bad', and neither does 'being a true artist' equal good. I could've been a bit more clear...as I think there's many 'manufactured' songs that sound great (why is it always 1-2 great songs by the same artist, no consistency in song quality that could fill an album?), such as Do It Like A Dude which is brilliant, I love it, and its anger actually feels genuine. Price Tag was a disappointment for the hypocrisy and basic chord structure and lame melody - funny because this song was way less over-produced than Do it like a Dude.

Point being: it's great that bloggers like you have an open mind about music. Because there's a lot of 'manufactured indie sound' out there aimed at getting credibility, again as opposed to expressing something artistically...which is a different subject matter altogether (or not really, but I realize I can't write a life-long comment!)! Have a nice day :D