I Dream In Colour - New Waves 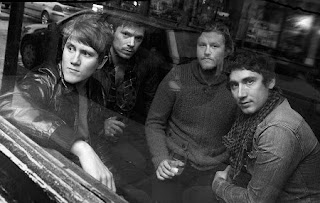 It’s been well documented by those that know that Britpop and its accompanying drunken skinny jeaned cousins landfill indie and lad-rock killed the heart, soul and very fabric of what was once known as indie music. It’s also likely that in a few years’ time the waistcoat and check shirted wearing anthemic folk-rock of the likes of Mumford and Sons will also be frowned upon as having destroyed traditional folk music. Dubstep too will eventually be derided and replaced with something else. It’s a genre with its back to the wall and at some point it will be shot down. This is because - we’re sorry if we’re repeating this hypothesis from previous blogs way back - pop music doesn’t wear out, it goes out – it has to reinvent itself to excite and fascinate buyers to consume more. This is why, those who find change difficult will be found skulking around bars murmuring ‘music isn’t as good now as it was when I was young.’

Having first recorded four tracks with Babyshambles and Mystery Jets producer, Iain Gore, the Essex band released The Boiler Room EP digitally last year and since then have recorded a BBC Introducing Session, been played on BBC 6 Music and have recorded tracks with producer Phil Tyreman who has worked with the likes of Doves and Belle and Sebastian. The band will release their new EP, These Folded Arms in May, via Monotwin and to give you a taste of the I Dream In Colour sound you can stream and download their song If You below. A brooding small masterwork in whopping guitar music that reaches for the sky and pulls clouds apart. Maybe there’s life in the epic-indie-rock beast still.

I Dream In Colour - If You
Posted by Breaking More Waves Blog at 12:01

Email ThisBlogThis!Share to TwitterShare to FacebookShare to Pinterest
Labels: I Dream In Colour