The Retrospective Soundtrack Players - Lucille and the Safety Pin 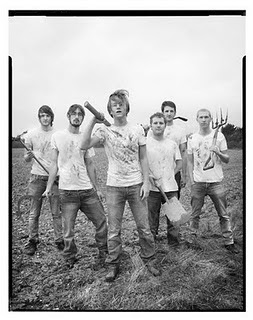 UK south-coast heavenly hoe-down outlaws The Retrospective Soundtrack Players first grabbed our attention back in October last year and now it’s time for more. If you’re playing catch up then by way of summary, they’re a group who produce original soundtracks to their favourite films. Their first project was the movie Cool Hand Luke where during the story Luke challenged himself to eat fifty eggs in one hour (see here).

The band are not just leaving their soundtrack inspiration to their recorded material though, as during live shows they are challenging an audience member to eat 50 egg sweets in 3 minutes, the time it takes them to play their song A Man Can't Eat Fifty Eggs. If you fancy the challenge, then you can catch them live during the next month or so in Southampton, Birmingham, Preston, Liverpool, Chichester and a home coming show in Portsmouth. They’ve also been confirmed to play the 2000 Trees Festival this summer.

The Frank Turner approved band also have a new single – the lolloping barn dance “2,3,4,” gang shout, banjo and harmonica rush of Lucille and the Safety Pin. We’re streaming its glorious two minutes and fifty seconds below and you can get it for free together with another song Standing In The Rain (Talking to No-One) by simply sending your email address to retrospectivesoundtrackplayers @ gmail.com. The band state that “If you feel like telling us your favourite film or book, or just divulging some spurious personal information, that would be lovely too.” Now for some music.