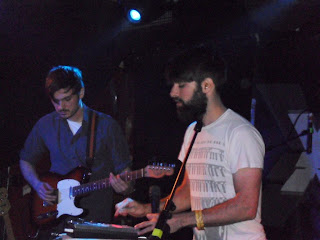 We tweeted about it last week, but frankly 140 characters doesn’t do justice to Belongings, the new single from Clock Opera. One of the more intensely dramatic songs from the band’s current live set Belongings is out on Moshi Moshi on May 7. It continues to affirm why as far back as July 2009 we got pretty charged up about the music of Clock Opera and they haven’t disappointed us since. There’s something intelligent and unique about the way Clock Opera create songs – they don’t seem to be following any fashion, trend or media led scene – they’re leaders rather than followers, innovating rather than copying and through it creating something that is compelling and long lasting.

If Belongings were a bar chart it would start with the smallest of bars in black and white of piano keys before slowly growing with an upward trend of bigger and bolder bars that finally explode in an arousing concentration of colour. Belongings is reach for the sky, stately euphoric pop music. The band have been around for a while now, but with Moshi Moshi being a label whose every release rouses interest, Clock Opera could be about to step up one more gear.

Before this single another new Clock Opera creation will be available to buy on record store day (April 16) as the band have remixed Tracey Thorn’s You Are A Lover which is taken from the Everything But The Girl singers acclaimed current solo album Love And Its Opposite.