Queen of Hearts - Where Are You Now? 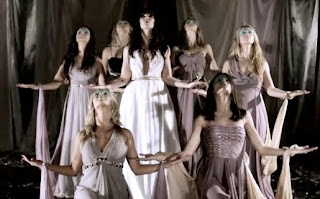 Remember when you lost your virginity? It seemed to mean something at the time didn’t it? But actually it didn’t. Let’s face it – no one cared. Especially five years on. It’s a bit like that for new music bloggers; being the first to get a song listed on Hype Machine seems important for a nanosecond until you realise that nobody is interested except you.

Queen of Hearts was one such pop starlet in the making that Breaking More Waves did it with; that is getting listed first on Hype Machine, not losing our virginity to. However with Freestyle still throbbing inside us, it’s time to hear a new song. It’s an electro-friendly piece of pop music called Where Are You Now that makes us think a little of a more sensual Little Boots for some reason (where is she now ?). More melancholy sounding than Freestyle, it bridges the gap until her debut single The Last Day Of Summer, a collaboration with Agebjorn (Sally Shapiro) and Ercola (Annie) is released in May on Paper Bag. Besides working with those fine folks Queen of Hearts has been in the studio with the likes of Fear Of Tigers (Kylie), Dreamtrak and Diamond Cut, so a wonderblast of pop should be being dealt soon. We’re looking forward to it.
Where Are You Now? (Produced by Diamond Cut) by Queen Of Hearts
Posted by Breaking More Waves Blog at 18:01

This song is awesome! I'm loving the stuff we've heard so far from Queen of Hearts. Can't wait for more.