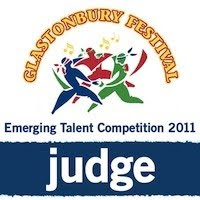 Monday saw the announcement of the Glastonbury Festival Emerging Talent Competition Shortlist. The long list of 123 artists, of which Breaking More Waves helped compile, was whittled down to a shortlist of 8. The final 8 are, in alphabetical order: Emily and the Woods, J Treole, Louise and the Pins, My First Tooth, My Tiger My Timing, Treetop Flyers, Tristam and Twin Brother. You can hear all of the bands on the player below.

"The standard of acts on the Emerging Talent Competition long list really was very high - for which we have to thank the blogger judging panel. It certainly wasn't easy to whittle them down to just eight artists for the live finals. But, after much tea and heated debate, we think we've come up with a great selection of acts, all of whom have a real chance of winning the main stage slot at this year's Festival. Bring on the finals!” said the judges.

Those of a certain alphabetical persuasion will notice the number of finalists that contain the letter T – as well as two of the bands having the word My in their title. The short list probably doesn’t contain that many unknowns for fans of new music – the vast majority of the acts on the list already having had some degree of exposure and being reasonably well established. This is something that we found when judging our cluster of bands for the long list as well – 2 of our 3 choices had already had exposure with only our third choice being a completely new band.

The live final takes place on the 2nd April at Pilton Working Mens Club. Keep an eye out on our twitter and this blog for updates on that.

Email ThisBlogThis!Share to TwitterShare to FacebookShare to Pinterest
Labels: Emily and the Woods, J-Treole, Louise and the Pins, Music Festivals, My Tiger My Timing, Treetop Flyers, Tristam, Twin Brother

I thought various cruelties would be in there. Weird.

Did they enter ? Not sure if I saw their name on the long list let alone the short list. They weren't within the Breaking More Waves judging cluster.