Music That Made Me #12 - Goodbye Mr Mackenzie - The Rattler 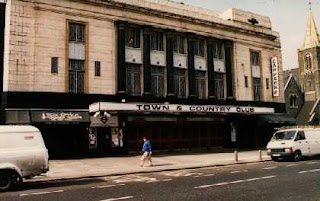 In 1988 I went to a gig that changed my life. Or at least it changed the way I viewed live music. Up until then, the few bands I’d seen had been in soulless concert arenas such as Wembley Arena, the gigs being entertainment more than anything transcendent or life affirming. The support band was a mild distraction that nobody was interested in and the shows, whilst all pleasantly diverting, were nothing more than that.

I’d become a big fan of the frisky buzz-pop of The Primitives – their single Crash had kicked its way into the UK’s top 10 singles, a beautiful blonde sore thumb of indie guitar melodies that stood out against the majority of the bland late 80’s chart rubbish – and took the trip to London to see the band with a friend of mine.

The event was a revelation. We stopped for a drink in a pub close to the venue – the Town & Country Club in Kentish Town - and I found myself surrounded by kids with black leather jackets, drainpipe trousers and attitude. There was no one selling glossy programmes outside, no hot dog stalls and the jukebox was playing The Jesus & Mary Chain, The Cure and Half Man Half Biscuit. Downstairs in the Town & Country Club itself there were no seats – the first time I’d ever been to a standing show. It felt exciting and very different to the ‘safe’ shows I’d been to until that point.

What’s more there were two support bands and the people who arrived early took notice of them. It was the second of the two - Goodbye Mr Mackenzie - who entranced me. Mixing edgy pop melodies with punk and post-punk influences, their suave lead singer sneered and crooned with menace and delight,guitarist ‘Big’ John Duncan filled the stage with both physical size and personality, and lurking in the shadows on keyboard a slight but beautiful gothic looking girl provided backing vocals. Her name was Shirley Manson and a few years later she would have international success fronting the band Garbage.

Suddenly going to gigs became a complete experience. It wasn’t just about turning up to see the main band and being entertained. It was about getting there early because something lower on the bill might be astounding. It was about the energy of standing shows; later when the Primitives played I was literally and metaphorically swept of my feet under the audience’s excitement. It was the realisation that sometimes the best gigs weren’t about the best musicianship, the best light show or even the best sound; it was about the emotion they generated and how they made you feel and think.

I came out of the Town & Country Club sweating, fired up and on a massive high. I wanted more. Over twenty years on I haven’t stopped.

Email ThisBlogThis!Share to TwitterShare to FacebookShare to Pinterest
Labels: Goodbye Mr Mackenzie, Music That Made Me

God, I had (almost) forgotten how terrible Wembly Arena was...
I think my favourite London venue was Shepherds Bush ... although thinking of support bands we did see Minty there...

I had a similar experience. I'd always listened to the top 40 as a kid and viewed the likes of John Peel and The Chart Show Indie Week as wierd and best and quite possibly satanic!

But one week I tuned into the Chart Show and very nearly changed channel when I saw it was Indie week - but an act called The Dave Howard Singers with a cover of David Essex's Rock On grabbed my attention - initially amusement but gradually I really got into it and it opened my eyes to a lot of wonderful music (including Goodbye Mr Mackenzie who were in the Indie Top 10 that week!)

I was double-excited when I realised that Goodbye Mr Mackenzie were based in Edinburgh (as was I!)

In pre-trainspotting Edinburgh few people were into the bands I got into, so going to London and seeing a market stall in soho or carnaby st selling badges, t-shirts etc of the bands I thought only I knew about was a revelation!