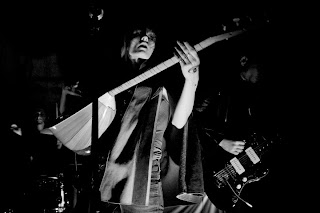 Breaking More Waves hometown of Portsmouth may be the most densely populated city in the UK outside certain parts of London, but fifty miles down the road neighbouring Brighton is producing a number of bands that bring that density to their music. With droning, pulsing webs of electronica, distorted guitars and funeral drums the sound of Dark Horses is heavy and not always comfortable, but it’s worth enduring. This six piece, each of whom have their own mini introductory video (click here for Lisa, Stevie, Tommy, Andy, Dom and Bobby ) have been kicking around the gutters of the south coast seaside town for some time now, but only released their debut single Alone last November.

The world of Dark Horses is one of dark narcotic splendour. They make a night-time vision full of murky instrumentation and nightmare soundscapes, far flung from Brighton’s kiss me quick, rampaging hen night, club-bound hedonism. It seems that the city has a surging undercurrent of darker textures; the recent critical acclaim of another Brighton band and no strangers to this blog - Esben and the Witch – has demonstrated that the place has a diverse musical landscape.

Dark Horses supported Kasabian and Black Rebel Motorcycle Club last year as well as playing the BBC Introducing Stage at Glastonbury. The band has been working with Richard Fearless of Death in Vegas fame and certainly you can hear links between the music that Dark Horses make and an album such as The Contino Sessions – both having a fondness for wasted gothic atmospheres. This is ‘head music’ – the kind of stuff that needs to be played under a bombardment of strobes, dry ice and darkness. Listen to the driving pulsating minimalism of Alone below and the evil saturated guitar sound of Rose Unconscious and you’ll understand what we mean.

As an aside, Portsmouth to Brighton transplant Ali Tollervey does most of their photography.