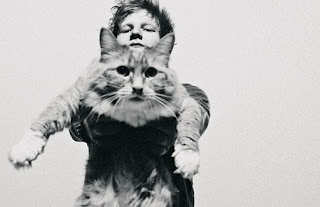 What exactly is new music? We pose the question because Breaking More Waves is fundamentally a new music blog and today we introduce another ‘new’ artist, yet this artist has already released a number of EP’s and albums which were all independently produced and distributed. He’s also had an article written about him in The Sun, an appearance on SB.TV that has already clocked up over 1million views on You Tube, toured with Example and has seen his most recent work the No.5 Collaborations EP create a huge buzz amongst his growing army of fans – enough to force the release into the highest reaches of the I tunes chart. Yet if you go to blog aggregator the Hype Machine you’ll find only a tiny number of blog posts - at the time of writing there’s a grand total of 2 - about this artist. It seems that somehow despite being highly prolific and despite being a prodigious talent, the world of new music blogging has ignored or not discovered Ed Sheeran.

Sheeran a pale skinned, ginger haired nineteen year old has found himself embraced by the grime scene with everyone from Wretch 32 to the up and coming Yasmin singing his praises because of his strong work ethic, charm and ability. He marries his soulful radio friendly voice with acoustic guitar, loops, beat-boxing and hip-hop rhythms with complete dexterity – watch the videos from the SB.TV performance and the excellent Station Sessions below and you’ll see why we’re sure that even the Hype Machine listed blogs won’t be able to ignore him for that much longer. We’ve also included, to get the number of Hype Machine posts up to 3, Ed’s cover version of Example’s Last Ones Standing, which we hope in our own small way will help promote an exciting British talent, irrespective of whether it’s new or not.

Footnote : Apologies for the abrupt end to the song below.