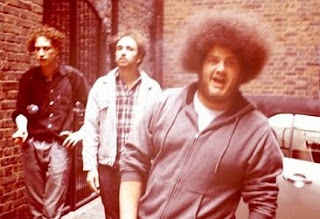 The debut long-player from Yuck was a noisy, frizzy liaison of guitars that showed that even when the weary spirits of Sonic Youth, Dinosaur Jr and Pavement were dragged up from the dank cellar something fresh and sprightly sounding could be created, albeit without sparkling innovation. What was missing however, was the restful cigar named Hamlet ballads that had been recorded under the name of Yu(c)k. Thankfully these recordings are now to see the light of day in a physical release with Yuck frontman Daniel Blumberg releasing the tracks by way of a 7 track mini-album called Forget in June under a new name - Oupa – as Yu(c)k was considered too confusing. Listen to the title track below. Lovely.

To coincide with this news and to satisfy those who prefer Pixies bass lines, feral riffs and melodic buzz, Yuck themselves have released a video for Get Away – one of our favourite songs from the album.