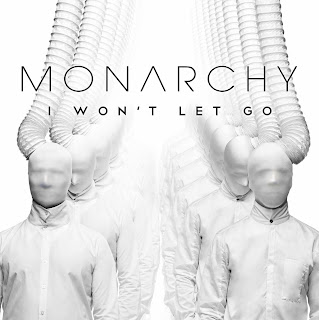 Anyone remember Monarchy? They were the mystery electro-pop group that broadcast live into outer space from Florida and rustled up all sorts of excitement and discussion in the blogs. Monarchy was the kind of act that would normally get Breaking More Waves pretty animated, but there was something nagging at the back of our mind that didn’t sit comfortably and so we didn’t feature them at all. Their album was sent out for review but something went awry and it never saw the light of day to the public. Then we caught them live at Bestival and to our surprise Monarchy were just a little bit thrilling – their set was sumptuously executed dance-art-pop that straddled the past and the future like Doctor Who doing the splits.

Now, in 2011, Monarchy return still as enigmatic as ever with I Won’t Let Go, with other new material in their bag (or perhaps that should read their spaceship locker) and a re-worked album which should finally see the light of day this summer. I Won’t Let Go is a dreamy sun-bound piece of synth-disco that manages to be the second song in a few months that uses lyrics about "limit to love" - but this is no James Blake mood piece. However, it seems that judging by the on-line coverage over the last 24 hours, the blogs and websites aren’t ready to let go of Monarchy yet either and we're finally ready to let them have some space. The single will be released through Moda on eleventh April.

I Won't Let Go by Monarchy
Posted by Breaking More Waves Blog at 12:01