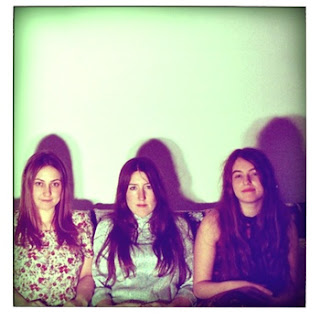 What is it with bands these days? Give them a silly name (Dog Is Dead, Black Light Dinner Party, Yuck) and they go away and make notably good music. Here’s probably the finest example yet. Stealing Sheep are impossibly lovely. That’s in a soft magical Blue Roses meets Alessi’s Ark meets First Aid Kit meets Peggy Sue impossibly lovely way; but underneath their gentle exterior there’s something bolder, more experimental and off-kilter that surprises and endures. There are hints of folk, lo-fi and campfire oddness in what this Liverpool based female three-piece do and it’s brilliantly charming. We’re just a little bit smitten with them. It might even turn out to be love.

Stealing Sheep are Becky, Emily and Lucy and formed after attending the Liverpool Institute for Performing Arts. But if you’re thing Kids from Fame / X-Factor styled pop stars in the making you couldn’t be further from the truth. Stealing Sheep are completely natural – we can imagine running through grassy fields to a river on a spring day and jumping in to its cool crystal waters whilst the band provide a soundtrack that’s loaded with buckets of harmonies and vintage wonkiness. Their EP The Mountain Dogs, released in February could be that soundtrack.

If you fancy poaching your own bit of the band, they’ve lined up a huge number of dates in the UK and Ireland this spring and summer including confirmed festival slots at The Great Escape, Sound City, The Trip Festival, The Secret Garden Party and Croissant Nuef – full details on their website (here).