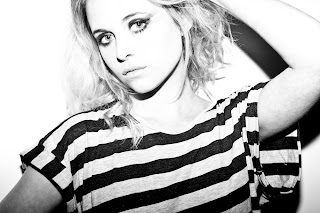 Regular readers may remember that last October we mentioned a Kyla La Grange track called Courage that she had up on her Myspace – a dense emotional torch song about the bravery that is sometimes required to leave someone even if you love them. Now finally we’re able to stream the song on Breaking More Waves and also offer a free download. Courage has a big sound full of echoing downcast Phil Spector-like military drums and raspy tender vocals that are head and shoulders above the crowd. Part widescreen-folk, part force of nature rock music, whatever genre you categorize it as it’s commanding and convincing.

Kyla’s next gigs are on March 8 in London - the official launch party for her single Walk Through Walls (Courage is the B-Side) and then she’s over to the States for a SXSW Communion / Neon Gold official showcase. It was of course at a Communion gig back in March last year that we first came across Kyla (here) and hopefully this show will generate some new U.S fans for her.

so excited for the gig on Tuesday