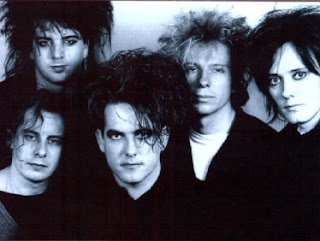 Some people are confused by my taste in music and subsequently what Breaking More Waves covers – from commercial pop to folk to more experimental and darker sounds. I’ve never been one for embracing musical snobbery or singularity in any way and the notion of only listening to music that is ‘cool’ is pathetic and shallow – coolness is transient – todays cool is tomorrows naff.

If there’s any one band in this series that defines those qualities it’s The Cure. From the dark dense wash of the Pornography album, which opens with the line “It doesn’t matter if we all die,” to the smiley optimistic chart-bound sounds of single Friday I’m In Love, The Cure are a band who have always done exactly what they wanted, embracing a myriad of styles from commercial to post-punk to goth irrespective of what is cool at the time. It’s this ideology that appeals to me. Their music makes me want to dance in the rain.

My favourite album by The Cure is Disintegration. In fact it’s one of my favourite albums of all time. If you've never heard it it really is essential listening. Ironically, despite Disintegration being highly introspective, depressing and gloomy in its nature it became the bands biggest commercial success. It's an album to really immerse yourself in, even if by doing so you're enjoying wallowing in someone else's deep despair.

I saw the band tour the record and even although we had seats at the very back of the auditorium the sombre beauty of the music and moody lightshow completely enveloped me. Tracks such as The Same Deep Water As You and Plainsong were magnificent in their out-of-reach darkness and Lullaby was a hauntingly sinister pop tune that perfectly merged commercial nuance with something from the shadows.

In all honesty it would be quite possible for this series of Music That Made Me to just include 52 songs by The Cure and it is a tough choice just choosing one, but Lullaby is of such perfection that it’s a necessity that it is chosen.

This September The Cure will be playing a two and a half hour show headlining Saturday night at my favourite music festival, one that I have a special association with having been to every single one since the first – Bestival. You can guarantee that when Robert Smith walks out on stage, for me, it will be just like heaven.

Email ThisBlogThis!Share to TwitterShare to FacebookShare to Pinterest
Labels: Music That Made Me, The Cure

This made me want to listen to some Cure again (weren't all their albums quiet to make you turn the stereo up?) ... except somewhere in the last X years transition from vinyl to CD to digital all my Cure 'records' seem to have evaporated. How did I let that happen? Thankfully there are online avenues now and I don't have to buy them all again!

I'm not sure if they were all recorded in that way but certainly there was a note on Disintegration that said that.

Incidentally many of the old Cure albums have now been remastered for your listening pleasure.