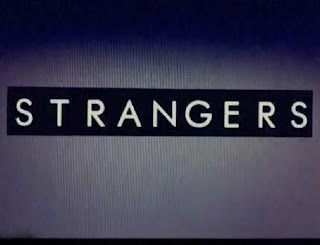 One of the journeys that slightly more leftfield pop music has gone on over the last few years is one from high colour and showmanship into slightly darker more introverted spaces – it’s an inevitable backlash against what has gone before. You can trace it through the spine of this blog – the phrase ‘pop-noir’ was first used back in April 2009 and ever since there has been a slow transition to darker places with the XX’s debut album being a keystone in changing the musical landscape. Pop music continues to go out of fashion rather than wear out and whilst no doubt further changes lay ahead, for now dancing in the twilight is a guilt free pleasure.

Strangers label their music dark pop and whatever it is, they do it rather well. We’re not talking about intense shoegazing layered-noise, but magnificent electronic pop music that superbly scales into territories occupied on one side by Hurts on the other side Gary Numan. Not everything has to sound angry for it to come from the night.

Another more direct reference to the sound of Strangers is a band we blogged in the past – NewIslands - who apparently are no more. However Strangers seem to slot into their clothes with a perfect fit. The song we’re streaming below is entitled In Chaos and is a track from their forthcoming EP (keep an eye on their website - linked above - for details). It’s cinematic and emotive – the sound of David Bowie impersonating the vampire lord of synthpop in a billowing robe. What more could you possibly want ?

STRANGERS - In Chaos by [STRANGERS]
Posted by Breaking More Waves Blog at 07:51

Email ThisBlogThis!Share to TwitterShare to FacebookShare to Pinterest
Labels: Strangers