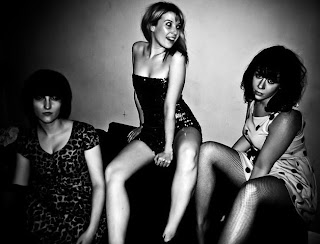 With their sassy-trashy-bubblegum-garage-pop, attitude body slogans and leopard print love Pris are the heirs to the vacant throne last properly occupied by the likes of Kenickie and Shampoo. Pris are a do-you-wanna-be-in-my-gang punk-pop collective who are basically too cool for school and too cool for you. They’re ridiculously and resolutely spunky, filled with attitude and vibrant as hell. Check their twitter for some of their comments – they’re probably going to upset a lot of people. “JESSIE J LOOKS LIKE A MENTAL MESSED UP MYSTIC MEG. DO IT LIKE AN ASTROLOGER,” they shout in capital letters. “Jesus Christ, we'll actually kill ourselves if we have to listen to Everything Everything ever again,” is another. Probably the best twitter account in the world ever. Their publicity shots seem to have them down as a three piece, but there’s a drummer boy lurking in the background somewhere as well, but frankly nobody cares about him because it’s all about the three girls up front, being cool as f*ck and giving it all they’ve got.

Pris are the antithesis of everything but are absolutely about something. You may have guessed by now that we like them a lot. And although you may not have clocked Pris, there’s a few who have already. Our musical taste blog near neighbours Just Music That I Like picked up on them very recently as has critic Everett True who called them The anti-Kings OF FUCKING LEON which is about as brilliant as it can possibly be. Pris are the girl group that in a perfect world would record a cheap shabby lo-fi cult debut album then sell their soul to the man, produce a follow up glossy hit record which will feature a spit and polished new version of their cover of Don’t Call Me Baby, then call it a day before everyone hates them.

Get your lipstick, hairspray, high heels and shades, grab your cigarettes, let’s get drunk, oh there’s going to be trouble, but it’s going to be fun. Punk pop with hooks that punch high, punch hard and punch good. “We don’t claim to be Chris Martin or Thom Yorke, we’re musicians in the very loose sense. Songwriting is for losers,” proclaims lead singer Cat. Right now we’re not going to disagree with her.

Crying After Kennedy by I Love Pris

Don't Call Me Baby (cover) by I Love Pris

Blu-Tack Baby by I Love Pris