Music That Made Me #10 Chuck Berry - Johnny B. Goode 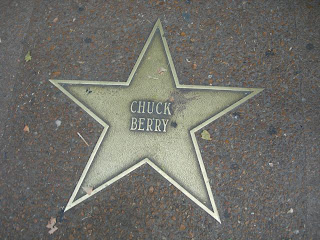 My dad died on the 28th October 2010 after a long battle with cancer.

My dad was an accomplished guitar player and in his younger life he had been in a band called Deke Holt and the Beat Boys. Later, when I was a teenager he constructed his own guitar from scratch – I remember the outside structure being curved and braced, the whole process taking months to get it perfect - it was a beautiful and intricately crafted piece of work and when he had it valued the price he was quoted was more than impressive.

Yet despite my dad’s interest in music I was never aware of him trying to influence or enforce his tastes on mine.

After my dad died my mum told me a story about their courting days.

In Bedford where they lived when they were young there was a tall hill, which if you climbed to the top you would find a tree. Carved into the bark of the tree were the names of many lovers. Those who whittled their names were making public statements of permanency – it was a youthfully simple and romantic statement to the world. My mum and dad carved their names and joked that they wondered if they would still be together in ten years. When you’re young ten years seems an eternity.

They spent their whole adult lives together, the marriage vows of for richer, for poorer, in sickness and in health, to love and to cherish; from this day forward until death do us part sticking true. My dad died at home with my mum looking after him right till the end.

It’s something that I learnt from my mum and dad. That love – real love – isn’t about those first years of romantic excitement. It’s about everything that comes after that. The last few months of my dad’s life were really hard for my mum – but both of them were incredibly brave and strong for each other and they never stopped loving each other.

The one thing that I’ve realised about my dad since he has gone, that I simply took for granted whilst he was alive, was his subtle positivity. In a world that seems to be full of people making harsh judgements on others behaviour, my dad saw the good in all that he met. It explains why everyone who knew him seemed to like him. There’s a lesson there I think.

My dad loved old rock and roll music - often from America. I remember when I was young he would sit in our dining room and play his guitar to himself, accompanied by a drum machine he had built from electronic components contained within a plastic sandwich box. Sometimes he’d play riffs from Chuck Berry songs. I probably didn’t pay much attention then. Yet just a couple of years ago I got to see Chuck Berry play live at a festival with my children. It made me think of my dad and how he probably would have enjoyed being there with me and his grandchildren - of whom he was incredibly proud of - watching those old classics being blasted out. Those raw rock and roll numbers influenced my dad and there’s no doubt that his positive and uncomplaining approach to life has influenced me. So for this reason, indirectly, this is the music that made me.

Email ThisBlogThis!Share to TwitterShare to FacebookShare to Pinterest
Labels: Chuck Berry, Music That Made Me