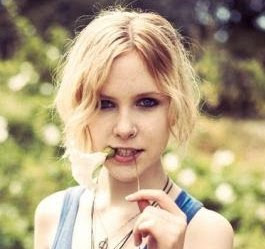 Of the ten artists on our Ones to Watch 2011 list, teenager Misty Miller could be described as the ‘token folk act’ but this would be widely inaccurate; because there was nothing tokenistic in our selection. Quite simply we adore her innocent songs that have already received the blessing of BBC Radio 1’s Rob Da Bank and Vogue magazine.

Misty has also announced a string of live dates in London and one other show out of the city, which rather surprisingly and very happily we’re pleased to announce is our hometown of Portsmouth on the February 22. In terms of providing the freshest, newest and best bands on the live circuit Portsmouth often loses out to its bigger cousin down the road – Brighton. For example this week Portsmouth’s latest gig additions include Brother, The Pigeon Detectives and The View, it’s hardly inspiring stuff. However you can 100% guarantee we’ll be at the Misty Miller show, in fact we’re cancelling a proposed trip to see Jamie Woon in Brighton that night to catch Misty live.

Besides the single which you can play, there's a recently released video of Misty Miller covering the fifties classic Why Try to Change Me Now, written by Cy Coleman. It was filmed whilst on the set for the shoot of A Little Thing Called Love – you may have previously heard versions of the song by Frank Sinatra and Fiona Apple. It’s whimsically lovely and wouldn't surprise us if it inspires a few more misunderstood teenagers (here, here, here and even the boys here) to pick up the ukulele and have a go - it's becoming quite a cult. If you live on the UK south coast why not treat yourself to a trip to the Eastney Cellars, Portsmouth and watch Misty play in February? Tickets are available here and here.