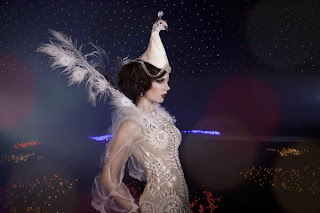 Which we guess is the point of these teaser / trailer videos.

Hopefully when the full reveal happens Queen of Hearts will actually be interesting rather than just pretending to be for fifty seconds. Here’s some ‘stuff’ about her, stolen directly from her MySpace:

Queen of Hearts writes songs about the important things in life - love, loss, heartbreak, betrayal - and thinks that the best pop songs should make you dance and shed a tear or two.

Queen of Hearts writes songs that have one foot in the future and one in the past.

Queen of Hearts thinks pop shouldn't be a dirty word.

We fully endorse Queen of Hearts last statement. In fact we said exactly the same in 2008 here.

Queen of Hearts has been recording with Fear of Tigers and is apparently also doing something in a studio with Richard X. We assume that that something is producing music rather than eating yoghurt or juggling plates for example.

That for now is all we know of Queen of Hearts. We shall watch with interest.

oh my. now that i can't stop laughing, i almost feel ashamed to call that a pretentious pile of expletive. to quote simon cowell "wot the hell was that??"

provided she doesn't think herself some sort of powdered donna summer, you might be right. post something you think might be worthwhile in the future. i think i'll only trust it if you try it first. oh my. i need a glass of water now.

1. At the moment I'm reserving judgement...I'm just saying that this interesting and I'm looking forward to seeing more.

2.Pretentious? Yep maybe, and from a pop aesthetic, sometimes there's nothing I like more than a little pretentiousness - flamboyance, glamour, and a high degree of artistic pretension is according to the Great Rules of Pop (Rule no.27) always allowed.

3. I only post things that I think are worthwhile, and I do think this is.