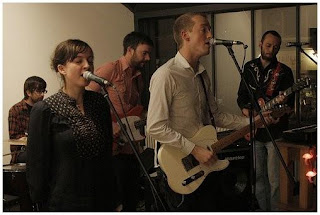 This is our final blog highlighting some of the bands that have come to our attention during our current involvement in the longlisting process for the Glastonbury Emerging Talent Competition. At the risk of boring regular readers we have to first utter our usual disclaimer that we’ve issued on every one of these posts and that is that the bands identified in this and the three posts that precede it will not necessarily be our 3 choices for the longlist – although they are being considered – but they are all artists that we’ve been enjoying. It’s the last we’re going to say on the competition until the official list is announced in March, when you’ll be able to see the acts that this and 39 other blogs chose to go forward to the next stage of the competition.

Red Shoe Diaries (pictured above) from Nottingham are very much a gentle indie band – call it twee if you must – and share a similar sonic territory to Belle and Sebastian and Felt. They’re the kind of band that are never going to have the word muscular applied as a tag to their songs, but that’s fine because sometimes a subtle and tender kiss is all the more tantalising than a drunken hard and fast tongue sandwich up against the wall. The band released an EP simply entitled Debut EP back in 2009 and don’t appear to have issued much else since, so fingers crossed that the fact that they’ve entered the Glastonbury competition and have a show at the Lexington in London on February 7 supporting Allo Darlin’ means that they are still a going concern and further material may surface. Our favourite tune from the EP is Underage Disco which should get old school Belle and Sebastian fans doing that awkward I’m-kind-of-cute-but-kind-of-embarrassed dance that they do. 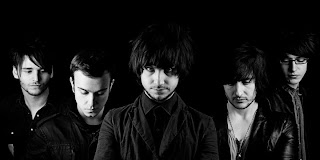 Our final choice are Temper The Wolves, a band who you can find hard gigging all over London in the next month or so with shows at (amongst others) 93 Feet East, Relentless Garage and the 100 Club. This Camden based five-piece create well-crafted electric guitar tunes that have just a hint of darkness in their sound. They reference bands such as The National, The Smiths and Joy Division as influences and certainly their music contains elements of classic indie-rock structures. With a Myspace that was only created late last year Temper The Wolves are very much a new band, but certainly show some promise with songs such as Cold Hands that both soar and swim in equal measures as their lead singer sternly intones “we slow dance tonight.”

Cold Hands by Temper The Wolves
Posted by Breaking More Waves Blog at 12:01

Wow...Temper The Wolves have that Interpol tribute band thing down pat ;-)

Temper rule!! Saw them at The Vibe Bar...What an awesome live show!

Thanks for sharing the bands you like. Well, if I had to pick three from this list it would be

I look forward to seeing what you actually chose (if indeed it was any of these...)