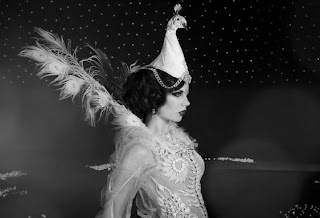 There’s often criticism of bloggers getting lustily excited about an artist based on one or two songs and then the artist not living up to the hype built around them – but isn’t that part of the excitement of pop music ? Hasn't a song ever kissed your ears and left you shouting YES !!!!!! In font size 72. Isn’t that partly what great music should be about – grabbing your emotions with ballsy domination and making you feel something? Taking you away from your drab mundane existence and making you want to dance, sing, cry or f*ck? We think so.

Freestyle by Queen of Hearts pretty much makes us want to do all of those things. It’s the only song we’ve heard of hers, so we have no idea about the future. One night stand or long term partner, let’s not worry for the moment and just enjoy.

We’ve already been there with the teaser video, the song itself (which we’re a little surprised hasn’t been picked up by more bloggers, but that’s taste for you) and now here’s the remix. An extended dub version clocking in at 7 minutes, we’ll be spinning it at our first DJ set of the year in (of all places) Bognor Regis this weekend. Download it by clicking on the arrow and get excited.