Music That Made Me #7 - Reviens - Herve Vilard 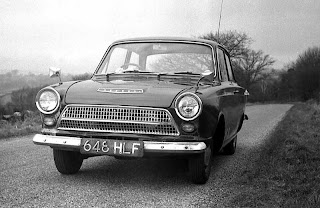 During the late 70’s and the early 80’s my childhood summer holidays were often spent camping in France. My mum and dad didn’t have much money so we would often end up pitching our heavy orange and blue canvas frame tent, complete with flower patterned curtains in a farmer’s field with little or no facilities, sneaking into a proper campsite to use their showers and amenities.

To get to our holiday destination we would spend many hours navigating our way across the French countryside in my dad’s blue Mark 1 Ford Cortina. It had no seat belts, no child seat, no air bags and yet I always felt safe cocooned amongst the sleeping bags, camping stoves, old pots and pans and jumbles of camping equipment that surrounded me on the back seat. As we travelled we listened to French pop radio. I remember very few of the songs we heard, most were unremarkable, but there was one that seemed to be on constant rotation – a cheesy easy listening number called Reviens. Sounding somewhere between Neil Diamond (who you will hear of later in this series) and Sacha Distel, it became my song of that summer. Investigation in a French record shop found the source and soon we were in possession of the 7-inch single by the singer – Herve Vilard.

I’m not sure if Reviens has fully influenced my tastes in music, look back over this blog and you probably won’t find anything that similar to it, but it was one of my first experiences of hearing a song on the radio and wanting physical ownership of it – a philosophy which despite our new age of streaming and downloads I still keep now. For this reason, Reviens by Herve Vilard is, for better or for worse, music that made me.

Email ThisBlogThis!Share to TwitterShare to FacebookShare to Pinterest
Labels: Herve Vilard, Music That Made Me