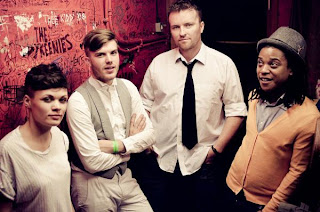 Remember when The Killers were exciting? When Hot Fuss brought electronic sounds into the indie guitar arena and made them seem arousing again? When Brandon Flowers even when he was appearing on the smallest of stages came across as a new cool and flamboyant star in the making? Well we get those same feelings about Kites. That’s not to say that they sound like The Killers, but there’s a link in terms of the aesthetic and way their music is presented.

This unsigned four-piece, formerly known as Remembering Everything create ambition fuelled pop full of drama and excitement. One tune, the spacey italodisco of The Disappearance of Becky Sharp, is the moment where the Human League, Kraftwerk and Erasure come together in a sequence of pulses and kiss for the first time. Even better is Take The Reins (streaming below) - a dazzling piece of cathodic beauty in which the bands not-so-secret-weapon - singer Matthew Phillips - croons his way to the heart. The man sounds like a pop-star and by all accounts his natural dandyish stage presence makes him look like one as well. Matthew not only has the songs but the character – read his ‘elevated prose that merits public ridicule’ as he describes his blog, to fully understand. His musings on everything from latent terror of becoming ill to his death threats to whoever stole his overcoat form a highly entertaining read.

But let’s focus on the music for now. Yes, there are big 80’s reference points in what Kites do but their sense of theatre and detail of the disco means that Kites still sound modern, fresh and delightful. They could fly.

Take the Reins by Kites
Posted by Breaking More Waves Blog at 21:00

Back in the early 90s some friends were in a band called The Kites, back in Chelmsford. Were really rather good!

Associating those good memories to the name may well have helped my like this more. I wonder if that's a psychological aspect ever used by some bands (Crystal Fires, for example...)?

Possibly, after all it's not uncommon for a 'scene' to develop with a whole bunch of bands using similar names. For example during Britpop the word 'The' was often dropped, bands having vague names...Blur, Sleeper, Chapterhouse,Pulp, Elastica, Sleeper etc....

Lets not forget the Wolf/Wolves and 'Parade' too, so many bands incorporating those over the last few years.